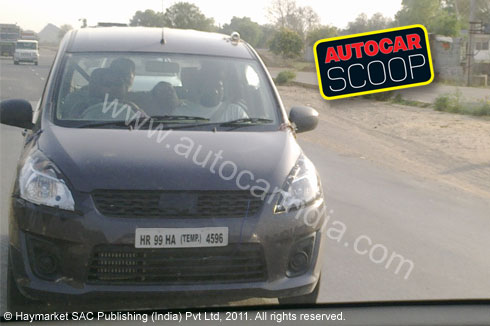 Just yesterday we showed you the first set of spy images of the to be launched R III, which is a six/seven seater MPV from our very own Maruti Suzuki stable. With this car Maruti Suzuki enters a new segment of cars which is the MPV segment. The R III is basically the extended version of the Maruti Suzuki Ritz.

The MPV is expected to powered by the 1.3 DDiS engine with 90PS power, same as the SX4 diesel. The one in these spy shots does not look like the ZDi which was seen in the earlier set of pictures as the front fog light and the black color mirror suggest it is the lower version maybe the VDi or the LDi. Maruti may even come up with a petrol/CNG powered version of this MPV too so that it pleases all both the petrol heads as well as the diesel lovers.

Since the car is spotted at Rajasthan we can consider it is doing hot temperature test rounds. Looking at the car in totality it looks perfect for the Indian buyer who has an extended family and the Maruti badge on the car will assure him low maintenance and cheap spare parts. It makes a lot of sense for the taxi operators as well who will fall over each other to get this one. In all probability this car is sure to garner some impressive sales for Maruti Suzuki.

We will keep you updated on the developments on this Maruti MPV, stay tuned!