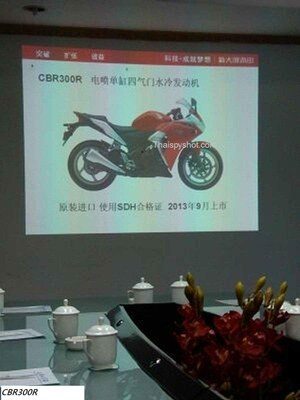 We became the first in the country to report about the fact that Honda is busy readying a 300cc variant of its popular CBR line up of bikes. The source of this info was a picture of a slide that belonged to a Honda internal presentation in Thailand.

As we could make out from the leaked slide, the Honda CBR300R might make its public debut in September this year and will be to the CBR250R what the Kawasaki Ninja 300 is to the Ninja 250R.

Now, what we have here today are some more details of the upcoming Honda. Powering the upcoming CBR300R will be a single cylinder motor that will benefit from having a 4 valve head and liquid cooling. There are good chances that this motor would be derived from that of the CBR250R. The bike could have a weight of 143 kilograms, which definitely is a tad towards the lighter side. The Bajaj Pulsar 220, for instance, weighs almost 150 kilograms. What we couldn’t get to know is if 143 Kgs. would be the bike’s dry weight or the kerb weight. The Honda CBR250R, which will play the younger brother to the 300R, tips the scale at 167 kgs (kerb weight). This means that there are good chances that 143kgs would be the dry weight of the upcoming bike, with the kerb weight being close to 156 kgs.

There are good chances that the boffins at Honda aren’t too happy with the introduction of the 300R, which further ups the ante in entry level sportsbike segment. Hence, there is a good probability that the CBR300R might be indirectly aimed at the N300. Indirectly because the Honda bike would be considerably less powerful and a lot cheaper. The battle of the Red and the Green is sure to take an all new turn with the advent of the CBR300R!