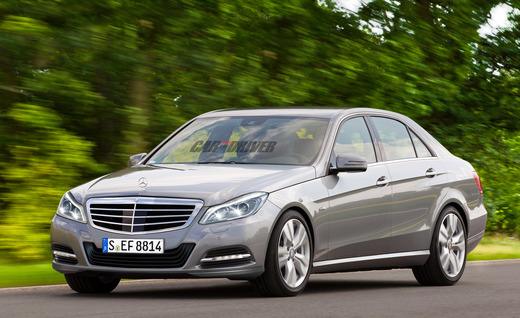 Regulars here would be aware that we have been closely following the developments associated with the upcoming Mercedes Benz E Class facelift. The spy pics of the updated car, that have been regularly surfacing on the web world, have given us indications to what the car would look like and now, we have a nice rendering from CarandDriver  that, in all probability, is a very close representation of the facelifted E Class (codenamed W212).

As we have been saying, the E Class refresh gets a new headlamp design with incorporated LED lighting and a new bumper. The car also gets a new design for daytime running lamps. Changes are not limited only to the front fascia as the rear fenders too will be replaced by less bold units. On the inside, the E Class will get a new dashboard with a more traditional Mercedes Benz design. The interior trim will get more colour choices and Heads-Up Display (HUD). As expected, the car will come with the latest Mercedes Command system along with the updated night vision system and latest MAGIC RIDE CONTROL.

It is being said that the current M271 four-cylinder petrol engines will be replaced with newer and more efficient M274 motors.  The car will get as many as four new petrol motors, ranging from a 1.6-litre four pot unit to a 429 bhp turbocharged 4.6–litre V8 and 2 oil burners in the form of four cylinder 2.1-litre and a 3.0 V6 motors.

The E Class facelift should be out early next year with the public debut scheduled at the Detroit Motor show in January.