Home News Mercedes Benz B Class to get 2.2 litres diesel engine in India 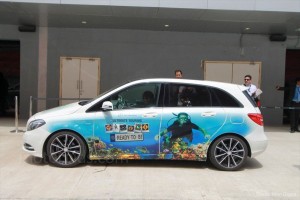 Regulars here would remember that we recently reported that the upcoming Mercedes A Class, which is slated for a May 30 debut, will come with a 2.2 litres diesel engine option. The A Class will become Mercedes India’s second offering that will be positioned lower than the C Class sedan. It has been a year since the B Class was launched in India and the car has met with reasonable success in our country. However, it is the lack of diesel engine that keeps the car from performing even better on the sales charts.

That the B Class will get a diesel engine in India this year is a known fact. It has now emerged that the diesel motor that would make it to the B Class could be the same 2.2 litres engine that will power the diesel variant of the A Class.

However, the India spec A Class and the B Class won’t get either of these two states of tunes and will have a lower power figure of 110PS and a peak torque figure of 250Nm. This means that the cars could have a fuel efficiency figure of as much as 20kmpl. The diesel variant of the B Class could be called as the B180 CDI and have an expected price of INR 27 lakhs.