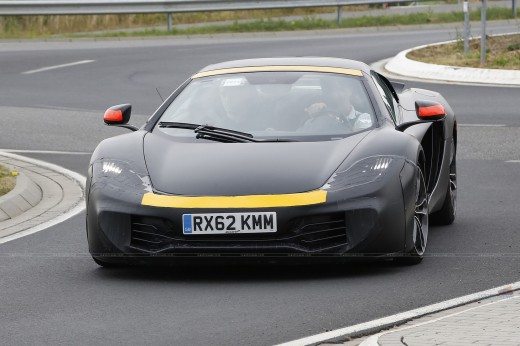 The upcoming McLaren 12C Spider facelift will get a revised front fascia which would consist of a new bumper and a new set of headlights. The 12C Spider could also get a new set of wheels for the facelift. It is being said that the car maker could be planning to bring the 12C Spider closer to the newly launched P1 hybrid in terms of design. The car could also get some minor updates for its interiors. However, nothing much specific is known about these changes at this moment. Mechanically, the 12C Spider will remain unchanged. This means that the McLaren 12C Spider facelift will continue to be powered by the same 3.8 liter twin turbo V8 engine, as the current model.

This is the same engine that powers the MP4-12C and also the P1, but in a different state of tune. For the 12C Spider, the twin turbo motor has a max power of 625 PS and comes mated to a seven speed SSG dual clutch transmission. All the power is sent to the rear wheel drive and the car is capable of dismissing the 100 km/h (62 mph) figure from standstill in merely 3.1 seconds.

The McLaren 12C Spider facelift is expected to make its first public appearance at the fast approaching 2013 Frankfurt Motor Show in September.

Stay tuned to Motoroids for updates on the upcoming 2013 McLaren 12C Spider facelift.