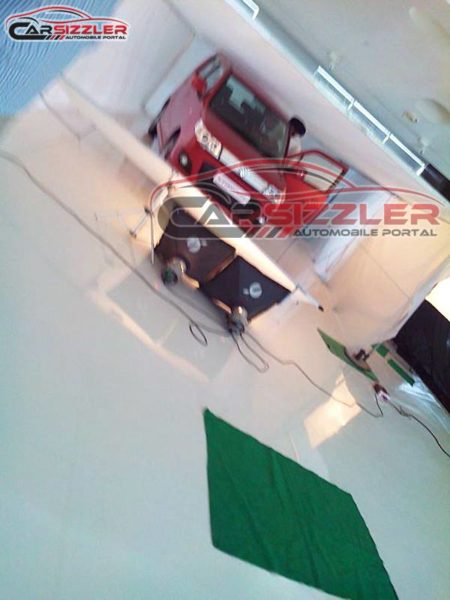 Regulars here would remember that we, at Motoroids, were among the very firsts to report that the Wagon R Stingray, the decidedly sporter looking variant of the world’s first tallboy, is headed our way. Now, the upcoming Maruti Wagon R Stingray has been spotted undergoing a photoshoot for the brochures for India.

It may be noted that the Wagon R Stingray isn’t completely different to the Wagon R that we all know of. Visually, the car sports a different front grille, sleeker headlights and a new bumper that has quite a gaping air dam. The car is also expected to get new design alloys for the Indian market. At the rear, the Stingray comes with revised taillights.

The insides are expected to get an upholstery change, faux silver inserts, a 2 DIN In Car Entertainment system and Stingray sill plates.

The India spec Stingray is expected to be powered by the same 1.0-liter K Series engine that powers the standard variants of the Wagon R. This engine has a max power of 68PS and a peak torque figure of 90Nm. However, we expect the Stingray to come with better throttle response than the Wagon R.

The upcoming Maruti Wagon R Stingray could be launched during the upcoming festive season and is expected to be priced around INR 15,000-20,000 more than the Wagon R.  Our guess is that the Stingray would be promoted as a ‘sporty’ variant of the Wagon R and could appeal to the youngsters, who have largely remained away from the car due to its boxy styling and uninspiring looks.