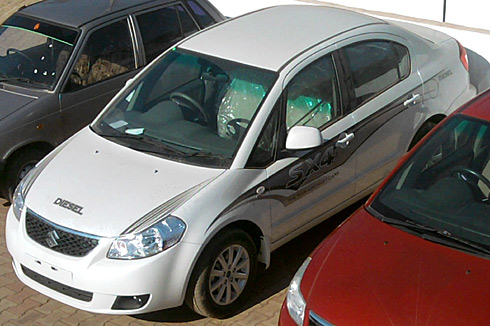 The one reason why the SX4 is not as successful in India as it should have been is that it doesn’t come with a diesel option. It is no secret that the company is plonking in the 1.3 litre Fiat sourced diesel engine into the car with 90PS and 200Nm of torque. However, the pictures of the diesel car hitting the interweb is definitely news.

ACI has managed to scoop the pictures of the new car parked at one of the dealerships. This means that the car is on schedule for its mid-February launch. Good thing is that unlike the Swift and Dzire, Maruti Suzuki is not going to bereave the SX4 diesel from the top of the line ZDi variant. Its notable that the Swift is not available in ZDi trim, and can be bought only in the VDi trim-level.

Maruti Suzuki is saying that their car will better the Manza and Linea which run the same engine in terms of both performance and fuel efficiency. The car will be cheaper than the Vento by a substantial margin. Expect a price increase of around Rs 70,000 over the petrol version.