India’s largest car maker, Maruti Suzuki, will be supplying an undisclosed number of production-ready Swift hybrid hatchbacks, named Swift Range Extender, to the government of India as a part of its pilot project. The Swift Range Extender was showcased at the Auto Expo 2014 last month.

Due to the upcoming elections, the dates for the supply haven’t been revealed. More clear information on the project will be available by the first quarter of the next financial year (financial year 2015). The company will provide the government with these hybrid Swifts in financial year 2015. 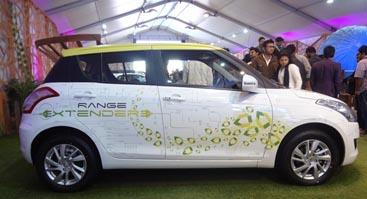 A source, close to the project, told Autocar,  “While the homologation process of the hybrid Swift is nearly completed, the team is expecting ARAI certification anytime now.”

The new Maruti Suzuki Swift Range Extender is powered by an inline three-cylinder, 658cc petrol engine. The car is also equipped with a front-axle mounted 55KW electric motor, which is powered by a 5kWh lithium ion battery. The production-ready model has been developed in India, but all the major electric components (electric motor, battery et al) required for this project were imported from Japan and other countries.

Stay tuned to Motoroids for more updates on the Maruti Swift Range Extender.