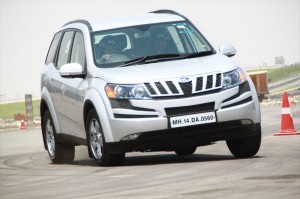 The Finance Minister of India earned himself a lot of flak from UV makers for the 2013 Union Budget. Thanks to the latest union budget, the excise duty for vehicles measuring over 4 meters in length, with an engine capacity of 1,500cc-plus and ground clearance of 170mm-plus, has been increased from 27% earlier to 30%.

Regulars here would remember that we reported that Mahindra could be busy working its way around the duty hike by modifying some of their vehicles. In line with this report, Mahindra has gone ahead and reduced the ground clearance of its high selling XUV5OO and has hence, got the car entitled to a duty-cut.

Mahindra has also fitted a ‘stone guard’ to protect the engine underside of the lowered XUV5OO.

The entry level W6 variant of the XUV gets a price cut of INR 27,000, with the top end W8 variant seeing INR 33,000 being knocked off from its sticker price.

Talking about the lowered ground clearance, Mr. Pawan Goenka, president, automotive and farm equipment sector, Mahindra & Mahindra, said- “The reduced ground clearance of the XUV does in no way affect the ride and handling of the vehicle. On the contrary, it has become more robust. We are evaluating whether the changed parameters can be applied to other vehicles. We are looking at the feasibility of a smaller power train for the Bolero, but that would take a minimum of 18 months to develop. The Scorpio is a power and performance-driven vehicle, and there is no way that we will look at a lower power train for it. We may consider a lower ground clearance for the Scorpio as well.”