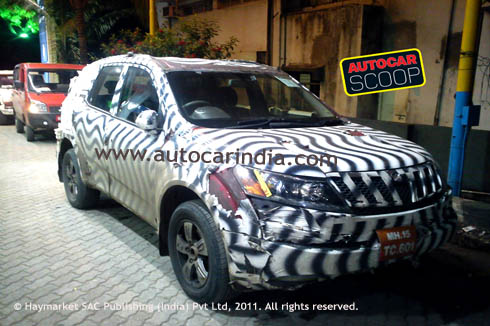 Autocar India have managed to snap the Mahindra W201 or the World SUV in the least disguised form yet, and should we say, it’s quite a looker. The proportions of the new SUV from Mahindra always looked spot on, but being able to see its headlamps, the grille and the huge bumper in all their glory has just raised the desirability quotient a little more for us.

Unlike most other SUVs from Indian manufacturers, the W201 doesn’t look like a flabby piece of metal. As we said, the proportions are spot on, and are complimented extremely well by the tight lines and sporty stance of the vehicle. It’s big, alright, but not lardy. It’s wide, squat and the roofline isn’t too high, all of which adds up to make the W201 look like an athletic, ready for action contraption. The new photograph also reveals the swept back, elongated headlamps, the nicely done Mahindra grille, a new design of grey finish five spoke alloy wheels and flared wheel arches.

By the look of it, the W201 appears to be a seven-seater, as the third window after the C pillar is quite long. The space inside should be generous going by the size of this machine. The sporty character of this vehicle is further brought to the fore by the fact that it doesn’t have a stepping board below the doors like most other Mahindra SUV’s. Very clearly, this one’s working its way towards presenting itself as a lifestyle machine than a people mover.

Mahindra are reported to have worked very hard on the ride quality and handling of this vehicle. It’s notable that the MUVs and SUVs from the Mahindra stable are known for their rather soft and wallowy ride and handling. We hope that Mahindra manage to set the springs right with this one.

The W201 Mahindra World SUV will be constructed on a brand new monocoque chassis, which should help it attain car like composure and handling. It will be propelled by the 2.2-liter mHawk engine, but probably in a different state of tune than found on the Scorpio. The expected power from the engine is 140bhp, and it’ll produce between 320-350Nm of torque which would be more than enough to make the W201, a capable highway machine. The transversely installed engine will turn the front wheels or all four, based on the variant you opt for. Transmission will be presented in both manual and auto versions.

Just like what Tata did with the Aria, expect Mahindra to load the W201 with tech gadgetry like traction control, ESP and half a dozen airbags. Just like all other Mahindra products, reliability and strength will be a given. And just like all other Mahindra products, an aggressive price tag would also be a given. Expect the W201 to be priced from Rs 12-14 lakh based on the variant you opt for.

Prospective SUV buyers sure have a reason to wait with this one. Stay tuned for more info.