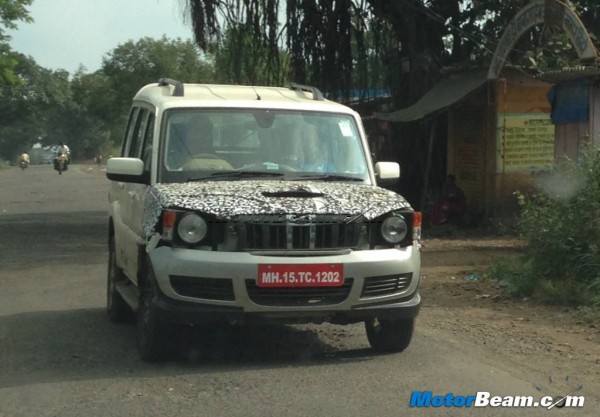 The Mahindra Scorpio 2013 facelift has been caught again and this time, the car has been spotted sans camouflage on the front grille. While we believe that the final product might come with a different front grille, we won’t be too surprised if this ‘Bolero-like’ grille is indeed what the car would get.

As we have been saying, the Mahindra Scorpio 2013 facelift will come to us with a new front and a revised rear end. The facelift should make the fast ageing car look fresh for some more time, before the next gen Scorpio is launched.

The Mahindra Scorpio 2013 facelift’s entirely new front end would sport a new bumper, new radiator grille, revised headlamps and probably new fenders. The car’s revised rear end will come with new lights, revised tailgate and bumper. It is being said that apart from the front and rear fascias, the car’s dashboard and upholstery too will be changed.

The car could also get additional equipment and re-tweaked motors. Don’t be too surprised if the new Mahindra Scorpio 2013 facelift is launched in November end.

What do you feel? With more modern competition such as the Nissan Terrano coming its way, would the cosmetic upgrades enough to make the Scorpio sufficiently potent to keep the competition at bay? Do share your thoughts by commenting below.

Stay tuned to Motoroids for more info on the upcoming 2014 Mahindra Scorpio facelift 2013.

All the Spy Pics are Courtesy: MotorBeam