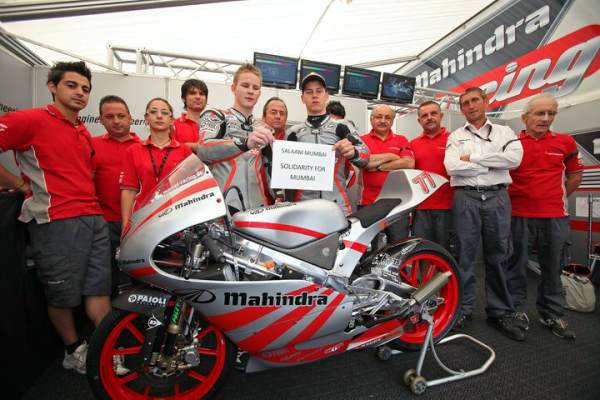 Mahindra Racing’s Danny Webb who had earlier scored points for the Indian team on earlier occasion as well, finished in 14th position to get two points for his team. The Mahindra team added to its tally of points with both riders overcoming problems to get to the finish of the first race at the challenging 3.671-km Sachsenring circuit.

Danny Webb managed to score points despite pain in his shoulder which he fractured two weeks ago in Italy. Team-mate Marcel Schrötter (18, from Germany) finished a frustrating 16th, one place out of the points, after a bad start put him near the back, and a lack of engine revs meant it took all his efforts to climb back towards the front. He had qualified 13th, but finished the first lap 27th after getting off the line badly.

Its notable that Mahindra is the only machine on the 36-strong grid with both engine and chassis built by the team.

The 125 class now has a break of four weekends, with only the premier MotoGP class attending next week’s US GP. For the riders, it will be a welcome break: for the Italy-based Engines Engineering, a chance to do further development to their exclusive disc-valve engine. The next race is at Brno in the Czech Republic on August 14.

Quotes from the riders

DANNY WEBB – 14th Position I got lucky, gaining places on the last lap when two guys crashed ahead of me – but it’s the first time I’ve had that luck all year. It was a tough race. Halfway through, my shoulder starting hurting badly. That meant I was putting more pressure on my left leg to compensate, and a muscle in my thigh pumped up and I had bad cramp. I struggled to carry on, not wanting to push too hard and maybe crash again and injure my shoulder worse. Now I’m here, in the points, and the results are in black and white. I’ll take it.

MARCEL SCHRÖTTER – 16th Position I got a really bad start, but that was not the real problem. I had quite a good feeling with the bike, and I was able to move forward … but I could have gone faster. For some reason the engine wouldn’t rev past 11,000 – it should be 12,500 rpm or more. It meant I lost a lot of power, and it was really difficult to pass anybody. Looking at the top ten times, I am sure I could have been there.”