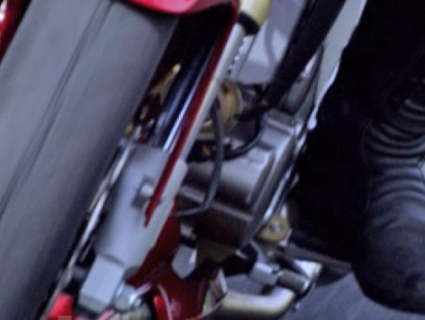 A few moments back we posted the teaser video of the upcoming Mahindra & Mahindra motorcycle. We just got an update from our member Satyen which points towards the interesting fact that you read in the title. The blokes at CNBC got talking to the Vice President – Sales at Mahindra 2 wheelers and have brought forward the news that the bike you see testing around the Vallelunga track in Italy is indeed a 300cc motorcycle. The bike, likely to be called the ‘Diablo’, will feature a parallel twin engine. A source working close to Mahindra 2-wheelers is hinting at a 25-27PS power output and a six speed transmission for the 300cc Mahindra motorcycle.

The earlier reports of the 125cc commuter seem to be true as well. CNBC confirms that the other motorcycle is indeed a 125cc bike and will go on sale along with the 300cc sports motorcycle. The commuter is expected to be priced between Rs. 46,000 to 48,000 ex-showroom, Pune. The 125cc mill for the commuter bike has been developed by Engines Engineering – the same engineering firm that has put its brains behind the Mahindra 300 cc sports bike. As we mentioned earlier, the Mahindra 300cc sports bike and the 125cc commuter bike will be launched by December 2010.