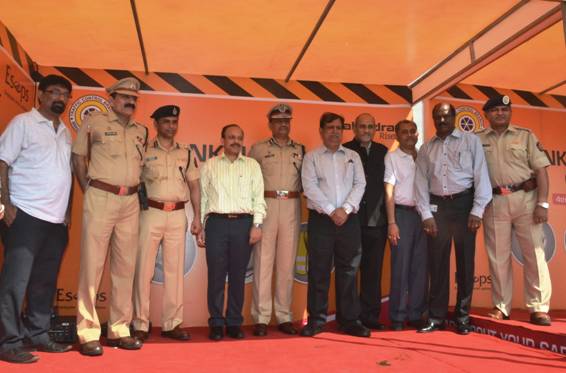 SANKALP was launched by Mahindra on the occasion of National Safety Day which falls on March 4 in India.

As part of this initiative, Mahindra will provide traffic police personnel with specially developed nose masks, florescent jackets with reflective tape and protective helmets to enhance their safety while on duty. In its initial phase SANKALP will cover more than 600 police personnel stationed on duty from Worli sea-link to Dahisar check naka while the second phase will cover an equal number of personnel from Worli to Church Gate. As part of this on-going initiative, the nose masks distributed will be replaced once every 15 days.

Speaking on the launch of this initiative, Rajeshwar Tripathi, Chief People Officer, Automotive & Farm Equipment Sectors, Mahindra & Mahindra Ltd said, “There is no doubt that Mumbai traffic police’s ability to handle ever growing traffic is one of the best in the country. Handling several thousand vehicles per hour at key intersections and along the city’s main arterial roads, police personnel have to often face challenging conditions such as noise, heat and vehicular pollution. Providing specially designed equipment will only help improve their experience and efficiency while on duty.”

Speaking on the occasion, Vijay Kalra, Sr. Vice President, Manufacturing Operations, Automotive Division, Mahindra & Mahindra Ltd. said, “As part of this initiative Mahindra will have its volunteers stationed at police stations to take care of the on-going needs of personnel, such as replacing the nose mask every fortnight and providing new helmets and jackets in case of any damage. The initiative is reflective of Mahindra’s philosophy enabling entire communities and those who commit to serving them to Rise”.