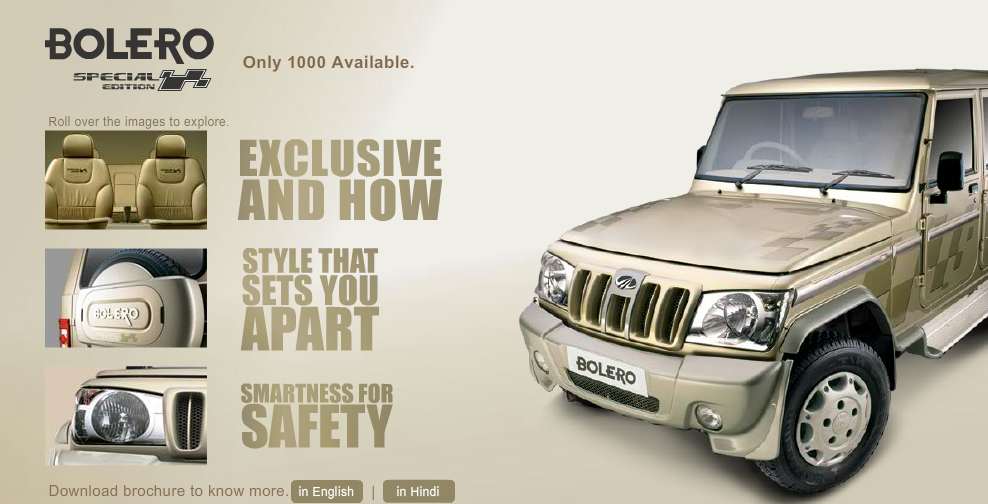 While not many of us talk about it, the Bolero is one of the best selling products from the Mahindra stable. The company sold more than 8200 units of the vehicle in March 2011 alone. Mahindra has just introduced a special edition version of the MUV. Christened as the 2011 Special Edition Bolero, the limited production vehicle features an array of visual enhancements. However, like most special edition versions of vehicles in India, this one too is devoid of any mechanical or performance upgrades.

Mahindra have introduced leather seats (now that’s going a tad too far for this segment) a new dashboard finish in the new version. The additions to raise the appeal of the Bolero’s interior, but it wont be right to still term the interior as classy or anything similar. On the exterior, the SE Bolero gets new graphics. The front grille and the central air-dam in the bumper now get a mesh finish. The spare wheel cover on the back of the wheel now has Bolero inscribed on it.  The special edition Bolero will be available only in two colours – Sahara Beige and Mystic Purple.
Also, the limited version would be available with what Mahindra calls the Bolero Tele Assist System (BTAS). The system is an anti-theft device which also lets you lock and unlock your car via an sms.

The Bolero Special Edition, however, will only be available with the 2.5-liter DI engine producing 63 horses and 180Nm of turning force. If it really is such a special car and only 1000 units of it will be manufactured, why could not have Mahindra plonked it the more power CRDe engine found in the Bolero VLX CRDe under its bonnet? Having an inferior engine on the top end, exclusive model of a car doesn’t make the owner very happy, does it?
The SE Bolero’s Price has been kept at around Rs 7.5 lakh ex-Delhi. Here are a few pictures