We reported earlier when it emerged that Mahindra will be showcasing their sportscar concept along with their Formula E racing car at the Auto Expo 2014. Now, thanks to ACI, we have the first image and some more details of the two seater electric sportscar concept from the Indian automaker. 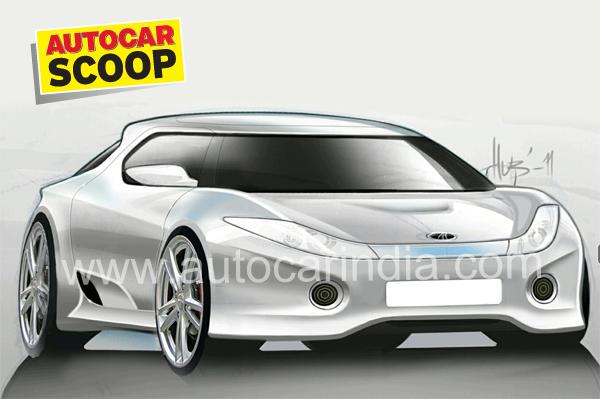 As already reported by us earlier, the car will be developed by-REVA, the electric mobility division of Mahindra & Mahindra (M&M), which has developed the E20 electric car.  The electric sportscar concept, christened ‘Halo’, is just a couple of days away from its global unveiling. The concept will be a two door, two seater and will be the second sportscar from any Indian manufacturer after the DC Avanti when it goes on sale. While the DC Avanti uses a 2.0 liter Ecoboost engine, the Mahindra Halo uses an electric motor.

The Mahindra Halo has been designed by Mahindra REVA’s in-house team, which consists of designers from Pininfarina and Bertone.  Mahindra REVA designers have deliberately gone for a more rounded and conventional shape to establish an image of practicality. “We want to convey that the Halo is not just a sports car but an everyday car that’s easy to own and drive” , said a source in Mahindra REVA to Autocar.

The Mahindra Halo will be powered by an electric motor developing approximately 105 KW (140 bhp). According to company sources, the production version of the Halo will come with a high-capacity battery “similar to the one in the Tesla”. The source goes on to say the car will do the 0-100 kmph dash under 7 seconds.

Mahindra-Reva plans to launch the Halo in both the Indian and international markets. The company will be conducting several market research studies in India and Europe to check customer reactions for an all-electric sports car.