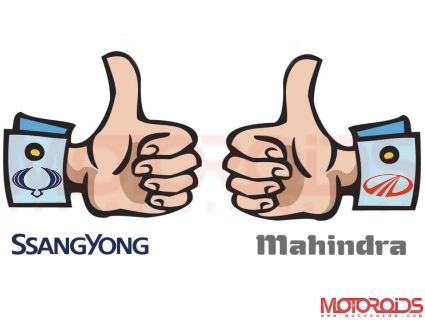 Mahindra & Mahindra Ltd. has announced that it has completed all formalities related to the acquisition of a majority stake in SsangYong Motor Company. This effectively means that the company is no longer in Court Receivership. Mahindra can now officially put on its thinking cap to visualize the way forward.
For Mahindra, the biggest benefit from this partnership will be the opportunity to harness synergies between the two companies, while protecting their respective brand identities and ensuring quality. Towards this end, a Synergy Council comprising of senior management from both companies will be established to ensure focus and delivery of synergies between the two companies. The Council will focus on various aspects such as global procurement, new car development and business strategy to penetrate international markets.

Strategic plans such as the India project which involves launching the Rexton and Korando-C in India have already been kicked off. Also under discussion are opportunities for joint product and technology development and synergy in global operations and purchase.  Mahindra has a strong IT system that is being reviewed for suitability for SsangYong. The company is also considering the possibility of Mahindra Finance setting up operations in Korea to enhance the sales of SsangYong vehicles.

Dr. Pawan Goenka, President, Automotive and Farm Equipment Sectors, Mahindra & Mahindra Ltd., mentioned that Mahindra was extremely conscious of SYMC’s Korean heritage and would only want to enhance it. SsangYong will be an independently run Korean company – with largely Korean Management – and will remain a ‘Made in Korea’ Brand.

He also announced that the new CEO of SYMC will be Mr. Yoo-il Lee, while Mr. Dilip Sundaram from Mahindra will be the new CFO. He also announced the names of the new Board of Directors of SsangYong Motor Company.
“This is a landmark day for all of us at Mahindra as it marks the beginning of what I am sure will be an enduring partnership with SsangYong Motor Company. I would like to thank all the employees of SsangYong as well as the company’s creditors for the help and cooperation extended to us during this long process”, said Dr Pawan Goenka