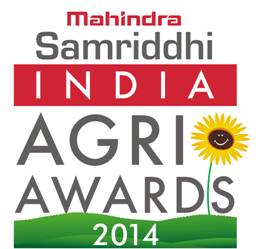 The Farm Equipment Sector of Mahindra & Mahindra Ltd. recently announced the fourth edition of the Mahindra Samriddhi India Agri Awards 2014 (MSIAA 2014). These awards were conceptualised and launched in 2011 to honour farmers and institutions, in order to recognize their noteworthy and purposeful contributions to the field of agriculture, which is the backbone of the Indian economy.

On this occasion, Mr. Rajesh Jejurikar, Chief Executive, Tractor & Farm Mechanization Business, Mahindra and Mahindra Ltd., said, “The Mahindra Samriddhi India Agri Awards highlight some of the most inspiring farmer stories in the agricultural community. It is a unique platform where farmers, scientists, institutions, universities and policy makers of the Govt. of India come together to exchange knowledge and share best practices on agriculture in India. MSIAA is a true reflection of our intent to spread the message of FarmTech Prosperity in India.”

Speaking about the entries expected for MSIAA 2014, Mr. Sanjeev Goyle, Chief of Marketing, Farm Equipment Sector and Business Head AppliTrac, Mahindra & Mahindra Ltd., said, “There are success stories in every nook and corner of the Indian agri space. Through the Mahindra Samriddhi India Agri Awards we want to highlight such stories and acknowledge the contributions made by these farmers to the Indian Agri space. In its first year we received 11,000 farmer nominations which increased to over 28,000 in the third year. The nomination phase is from November 10 to December 10, 2013 and this year we would like to set a new record for nominations.”

MSIAA is an extension of the company’s Mahindra Samriddhi Intiative which aims to enhance agricultural productivity through creative farming technologies, leading to increased rural prosperity. As part of this concept, 160 Mahindra dealerships have been transformed into Samriddhi Centres offering the farmer easy access to technological know-how, hybrid seeds, soil and water testing facilities, demo farms, finance, insurance, internet updates and sales & servicing of tractors and implements.