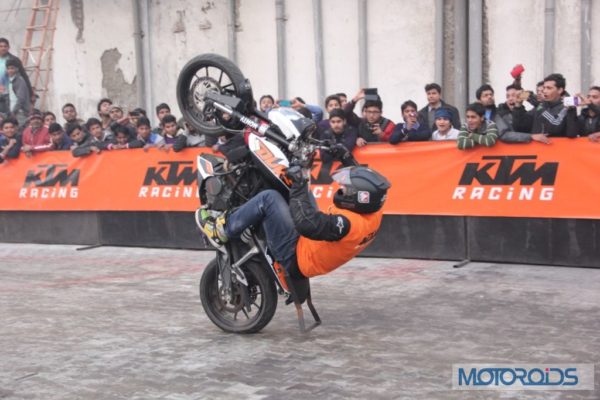 KTM is well-known to engage with its audience through various motoring events. One of such events is the KTM Stunt show which was organised in Ghaziabad. This motoring event displayed various stunts and tricks by the professional stunt riders on KTM Duke motorcycles. The Stunt show was held in Europark Mall, Sahibabad. The event was open to all and the spectacular stunts took the city by a storm. Till now, KTM Stunt show has been organized at Jaipur, Jodhpur, Kota,Surat, Meerut, Jammu, Bareilly, Ghaziabad, Saharanpur, Varanasi, Indore, Noida and many other towns.

According to Amit Nandi, Sr. Vice President- Probiking, Bajaj Auto Ltd, “The KTM brand is known for its high performance racing bikes and we always want our customers to experience the thrills and adventure which KTM bike can provide. Professional stunts are being conducted in every major city and will keep on growing in scale in the near future. KTM is a an exclusive premium brand and we are keen to ensure we provide KTM customers an experience that is uniquely KTM.” 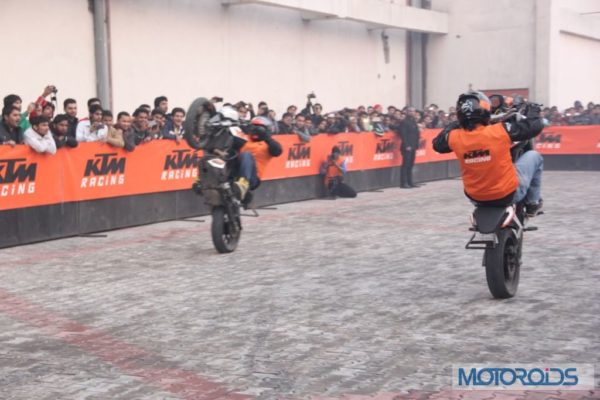 KTM made its official debut in the Indian market with the 200 Duke motorcycle in January 2012. The motorcycle garnered appreciation from motorcyclists across the country. The successful motorcycle was later followed by the 390 Duke. The Austrian motorcycle major recently introduced the RC390 and RC200 motorcycle. The company organises various events such as the Orange Day and Orange Ride to interact with its customers.