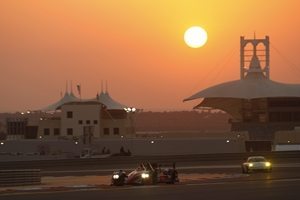 Popular Indian racer Karun Chandhok put his JRM Racing in overall 5th position after the first day of practice in the 6 Hours of Bahrain in FIA World Endurance Championship. Chandhok returns to the track where he made his Formula One debut back in 2010. Chandhok also drove in Bahrain previously as part of the GP2 Series, The trio of David Brabham, Karun Chandhok and Peter Dumbreck put the Honda HPD ARX-03a into fifth overall with a laptime of 1:49.100, second quickest in the privateers’ championship.

The day’s first session at the Bahrain International Circuit in Sakhir, just outside the capital Manama, started in bright sunshine and finished in darkness as the sun set over the circuit. The #22 completed 31 laps in total, with all three drivers getting their turn in the car. Peter – who has never been to Bahrain before – opened the session before handing over to David and then Karun, who set the #22’s quickest time of the 90mins, a 1:51.334. Unfortunately, after checking the car over at the end of the sessions, the crew found a crack in the gearbox, thereby requiring a change.

The #22 was quickly readied for FP2 with only minimal delay, allowing the drivers to continue the run programme. Peter was first up in the car before David took over, with Karun again completing the day’s running. The Indian, who made his F1 race debut at the track in 2010, set the team’s quickest time of the day – 1:49.100 – after 24 laps, putting it into P5 overall and second in the privateers’ classification.

Karun Chandhok, who has had the most running at the Bahrain International Circuit was happy with the strong start to the weekend. He added, “We chipped away at the programme with lots of set-up changes over the two sessions. We all decided it was better to leave one driver in the car and make systematic changes and, as I have the most experience of the track having been here with GP2 and again with F1, it was easier for me to do the most running. I was pretty happy at the end of the second session and was able to do a reasonable time right towards the checkered flag. Hopefully when Peter and David get in tomorrow they will pick up where I left off.”

Nigel Stepney, team manager and chief engineer, said, “The team did a fantastic job today. In such high temperatures it’s not easy to start with, but to do a gearbox change between sessions and have the car ready on time is a great effort. Getting the car finished just for the start of FP2 meant we had to do a lot of the set-up work during the practice as we used the earlier session for circuit familiarization. Once we had the mandatory five laps during nighttime running out of the way, we had a fairly comprehensive programme and set a quick time at the end of the 90 minutes. This shows there is still a lot more to come from us tomorrow.”

You can watch live streaming of the Race at www.fiawec.com starting 6:30PM on Saturday