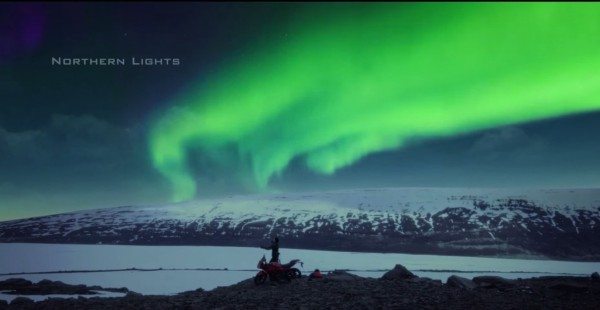 Look beyond the controversial styling and even the biggest of critics will agree that the Karizma is one of the best touring motorcycles in India. The bike was recently refreshed and as is the norm with all Karizma adverts, this one too had a dramatic plot. The new Karizma ZMR commercial featured a man who is aboard an ice-breaker ship and is hell bent on capturing the ‘Northern Lights’ on his camera.

When the Captain realises that the ship cannot go any further, the man takes the covers off his bike and soldiers on in the jewel breaking cold weather on his motorcycle. He is surprisingly immune from any frost bite as he rides his bike with an open visor, neither does he care about his face going numb as he splashes some water on his face. On his way to the top of a cliff, where he sets up his tripod to capture the amazing phenomena of nature, the man encounters some Penguins, but Google tells us there are no Penguins in the Arctic. Maybe the Karizma ZMR managed to attract them all the way from the Southern Hemisphere.

Now, the largest motorcycle manufacturer in the world is running a “Top of the World” contest, which will select 3 lucky people, who will win a chance to see the roads conquered by Karizma ZMR in Iceland. All one needs to do is upload a picture with a caption on their site, which describes your top of the world moment.