If Formula One rumor mongers are to be believed, then Jenson Button will be donning a McLaren racing suit for the next season. The 2009 F1 champion is yet to sign a driver’s contract with any of the teams including Brawn GP. Mclaren intends to replace Heikki Koveleinan for the 2010 championship. They were interested in signing up Kimi Raikonnen but have been unsuccessful in negotiating a contract.

According to Martin Whitmarsh, Team Priciple, McLaren, they have talked to a number of drivers. He revealed that they will hire the two best drivers as they always have. He did not divulge any information about the likelihood of Button completing an all Brtish driver line up for the next season. 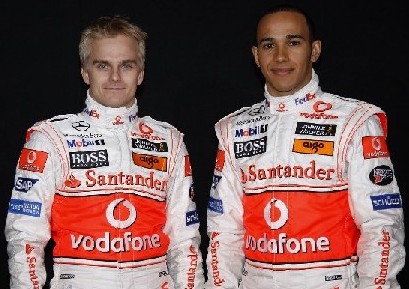 Adding fuel to the fire is Lewis Hamilton. He was quoted in the Daily Mail newspaper “I would welcome Jenson as my team mate. The 2008 F1 championship winner denied reports that he was attempting to ensure McLaren didn’t hire a top driver alongside him. The Briton driver further commented that he doesn’t mind who comes to the team as along as they come in peace and wants to be productive by moving the team forward.

At the post championship winning conference Button had told the media that he wouldn’t switch to another team from Brawn GP for monetary reasons.  Maybe the expense of maintaining a lingerie supermodel girlfriend is getting to him.