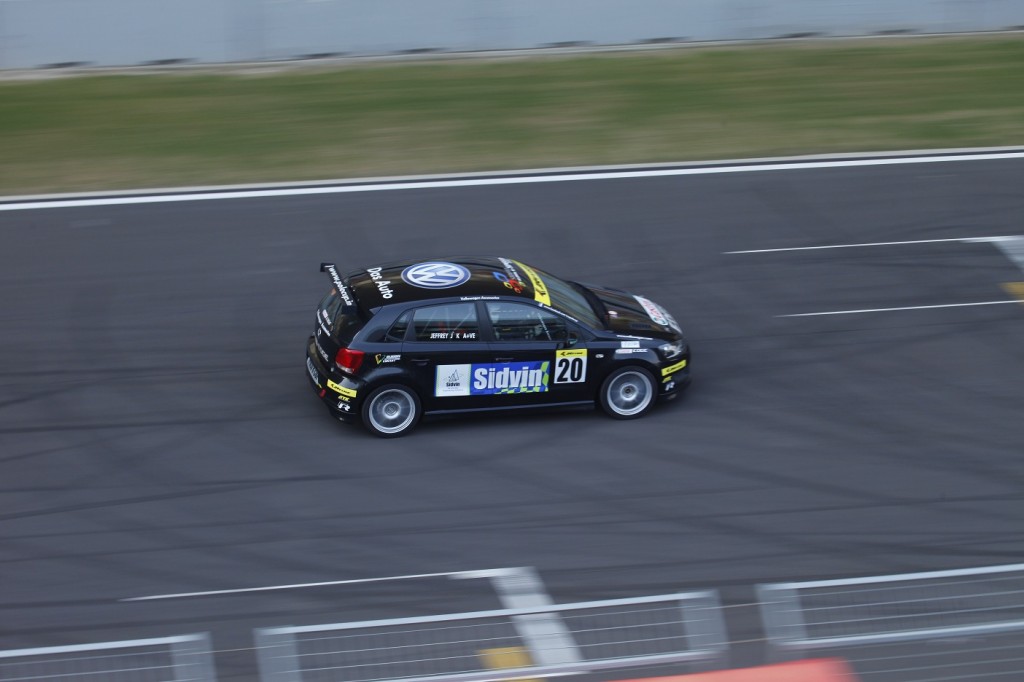 Last round of the Volkswagen Polo R Cup 2012 season began with surprises. Jeffrey John Kruger, one of the 2 guest drivers from South Africa, clinched pole position in his debut race in India by setting the quickest lap time of 2:26.039. This also happens to be Jeffrey’s first ever race on a Formula 1 circuit.

He will be joined in the front row by Avdumber Hede who was 1.523 seconds slower than the behind the leader. Ameya Walavalkar and Saurav Bandyopadhay will start 3rd (clocked 2.027 seconds behind the leader) and 4threspectively.

This year, in contention of the title is Ameya Walavalkar (384 points). He is followed by Sandeep Kumar (307 points), Rahil Noorani (301 points), Avdumber Hede (277 points) and Saurav Bandyopadhay (237). With 2 races and 60 points for the winner of each race, the championship is still open.

After clinching the pole, Jeffrey said, “It’s the first time that I am driving on a Formula 1 track and it feels great. The track is far more sophisticated than any other track I have ever driven on. I have my basics right but I still feel I can push the car even further. Tomorrow is not going to be easy as I have strong fellow racers in Avdumber and Ameya. Volkswagen coaches and technicians have helped me to prepare myself for my first race here in India and I would like to thank them for their support.”

Starting second on the grid, Avdumber said, “I am happy that I am starting on the front row of the grid but I feel I could have pushed my car harder. Jeffery put on an amazing performance and I must congratulate him. I am here to win and hope to grab the championship tomorrow.”

Prithviraj Siddappa, Head of Volkswagen Motorsports India, said, “It’s the last leg of the Championship and with Jeffery clinching the pole, it has added a twist to the tale. The drivers have improved a lot from the pre-season tests that we did earlier this year and we are glad that they have adapted well to this F1 track.” He further added, “We at Volkswagen Motorsport have always supported and encouraged talent to get an opportunity to race in different countries, Diego from Mexico has raced with us for the complete season and we have siblings Jeffrey and Robyn from South Africa racing as guest drivers for the Finale.”

The qualifying grid for Race 1 of Round 6: