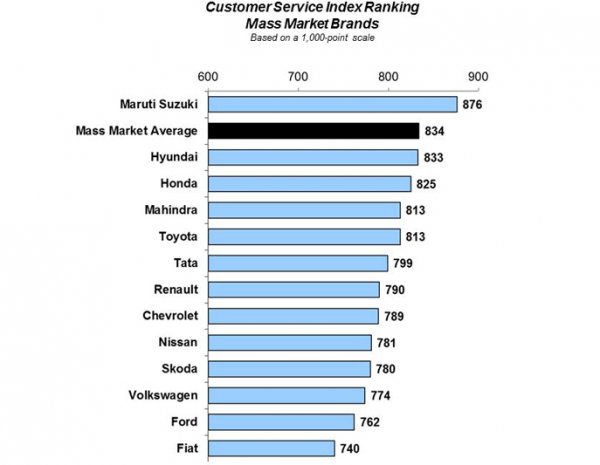 Although the number of workshops in automakers’ service networks has increased significantly, the establishment of workshops in key locations where vehicle owners often live or work is not aligned to customer needs, which means it still takes vehicle owners the same amount of time to reach a service workshop as it did in 2009, according to the J.D. Power Asia Pacific 2013 India Customer Service Index (CSI) Study SM released today.

The study, now in its 17th year, measures satisfaction among vehicle owners who visit an authorized dealership service center for maintenance or repair work between the first 12 to 24 months of vehicle ownership. The study measures overall satisfaction in five factors (listed in order of importance): service quality; vehicle pick-up; service advisor; service facility; and service initiation. Overall customer satisfaction is measured on a 1,000-point scale, with a higher score indicating higher satisfaction.

Convenience of location is among the key reasons of workshop choice among vehicle owners in India over the past 5 years. Yet proximity of service workshops in India remains an issue for vehicle owners. This has been compounded by the uneven growth of new-vehicle sales among the various regions and cities of India. New-vehicle sales have increased in areas that have fewer, or are farther away from, workshops. As a result, the study finds that the time it takes vehicle owners to reach a workshop—25 to 30 minutes, on average—has remained largely unchangedduring the past five years.

“While there has been service network expansion by all automakersduring the past five years, the locations of these establishments are not sufficiently meeting customer needs in many cases either due to real estate availability, cost and local regulations,” said Mohit Arora, executive director, J.D.Power Asia Pacific. “Since vehicle servicing is seen as an essential errand, any steps taken to enhance customer convenience are likely to be appreciated.”

The study also finds that automakers and dealerships are attempting to manage their per day intake of service vehicles by encouraging customers to schedule an appointment. 70percent of customers made an appointment for service in 2013, compared with 65 percent in 2012.However, these service volumes have not been sufficiently aligned to manpower and infrastructure planning. While 82 percent of customers are attended to immediately when they arrive at the workshop, 18 percent still have to wait to get their vehicle in for service, an increase from 16 percent in 2012. Among customers who have to waitto get their vehicle in for service when they arrive at the workshop, 62 percent made an appointment for their service.

“Most vehicle owners prefer to schedule an appointment for service as it helps them plan their day,” said Arora. “It is important for dealerships to ensure that relevant skilled manpower is available to ensure a smooth process for getting the vehicle in for service and minimize waiting time. This is likely to become a key driver of overall satisfaction with the after-sales service process in India.”

Maruti Suzuki ranks highest in customer satisfaction with dealer service for a 14th consecutive year, with a score of 876. Maruti Suzuki performs particularly well across all factors. Hyundai (833) and Honda (825) follow in the rankings. Hyundai is also the most improved brand in the study, with significant improvements achieved across all five factors.

The overall quality of service completedcontinues to show consistently strong performance across the industry year over year. While 93 percent of owners indicate that the work was done correctly the first time, which is consistent with 2012 results, 71 percent of owners indicate that their vehicles were returned cleaner after the service—a 7 percent increase from 2012.

“The quality of service remains consistently high, evidence that the automakers and their dealer networks are working hard to make service a satisfying experience for their customers,” said Arora.

Vehicle owners who are highly satisfied with dealer service tend to have higher levels of advocacy and loyalty to the dealership and the brand. Among owners who are highly satisfied with their service experience at the dealership (service satisfaction scores averaging 949 or higher), 93 percent indicate they “definitely would” revisit their service dealer for post-warranty service. In contrast, only 32 percent of less-satisfied owners (service satisfaction scores averaging 766 or lower) say the same. Similarly, 88 percent of highly satisfied owners indicate they “definitely would” purchase their next vehicle from the service dealer, compared with just 30 percent of those who are less satisfied.

The 2013 India Customer Service Index Study is based on evaluations from 7,477 vehicle owners. The study was fielded from May to August 2013 and includes owners who purchased their vehicle between May 2011 and August 2012.