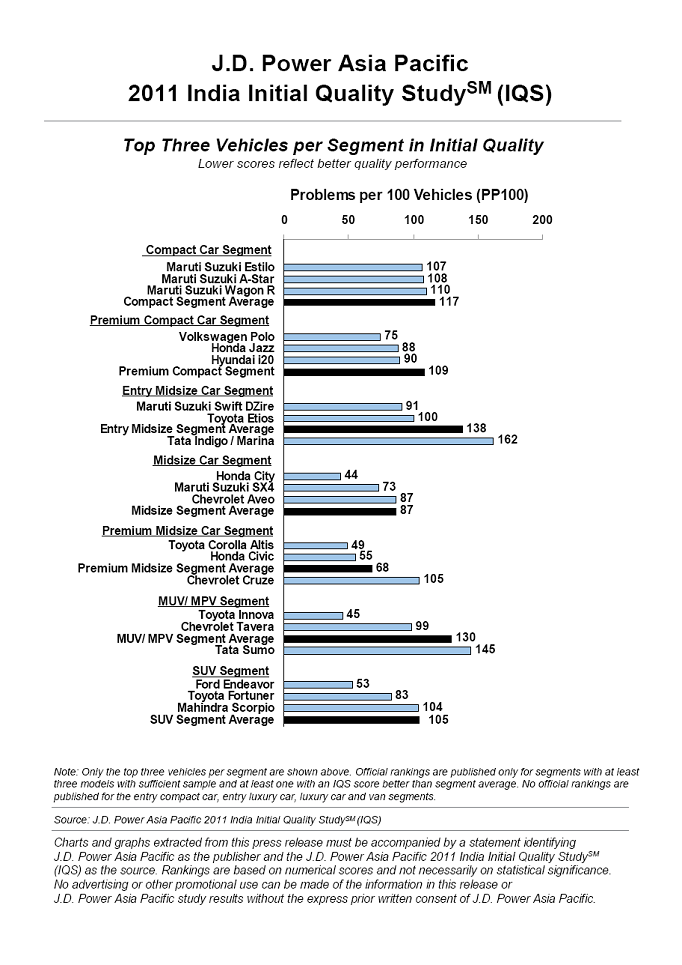 J.D. Power recently made public the 2011 edition of India Initial Quality StudySM (IQS). The report portrays that the initial quality glitches in newly introduced vehicles have decreased by good 16% in 2011, when compared to last year’s data. Almost 33% of the total problems reported are related either to engine or the transmission. The report factors in the problems cropping up in the first two to six months of ownership. The study consists of as many as 200 problem covering eight vehicle categories. These categories are: drivetrain; exterior surface; drive experience; features, controls and displays; HVAC; vehicle interior; seats; and audio, entertainment and navigation. All the issues are listed as the number of problems per 100 vehicles (PP100). Simply saying, a lower PP100 score indicates a lower rate of problem occurrence and hence, a higher initial quality.

The popular entry level midsizer Maruti Suzuki Swift Dzire ranked the highest in its segment for two years in a row, while the Estilo, from the leading manufacturer, got the highest ranking in small car segment. It may be noted that all the top three spots have been won by Maruti Suzuki, not for nothing do we  regard it as the king of small cars. It may also be seen that the Tata Indigo Manza falls short of industry average.  Unsurprisingly, popular MPV Toyota Innova ranks highest in the MUV/MPV segment for the 5th year in a row while the well sorted Toyota Corolla Altis ranks highest in the premium midsize segment. Speaking of utility vehicles, Ford Endeavor received the top slot on podium in the SUV segment, while for the ninth time (consecutively!!)  Honda City ranked highest in the midsize car segment. Volkswagen Polo pipped the Hyundai i20 and the likes as it’s owners are the most satisfied lot in the premium compact car segment.