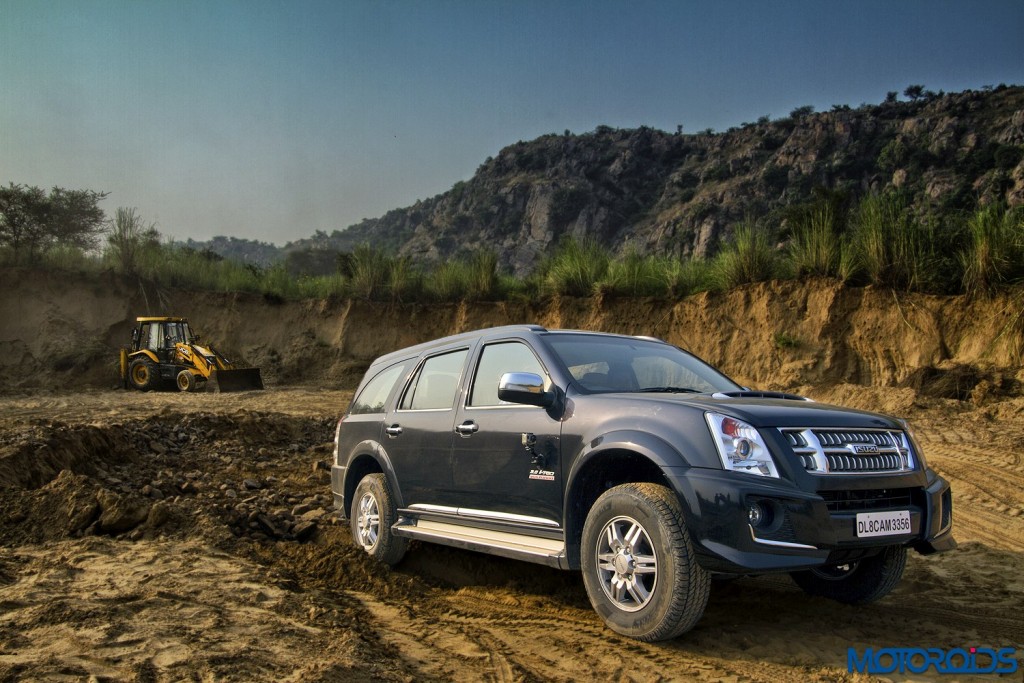 Indians, in recent years have developed a taste for big, brawny SUV’s. Now when there is a market, there are car manufacturers who want a big slice of that pie. Big SUVs like the Fortuner, Scorpio and XUV500 are a common sight these days, and with increasing disposable incomes people aren’t too concerned about spending more than two million rupees if they get the requisite presence and punch.

Every car type has its own key features which people want more of. For sedans, it’s the comfort, for hatchbacks its economy with practicality, for sports cars its speed and handling and with SUV’s, it’s a capability to go off the road, along with an imposing demeanor. 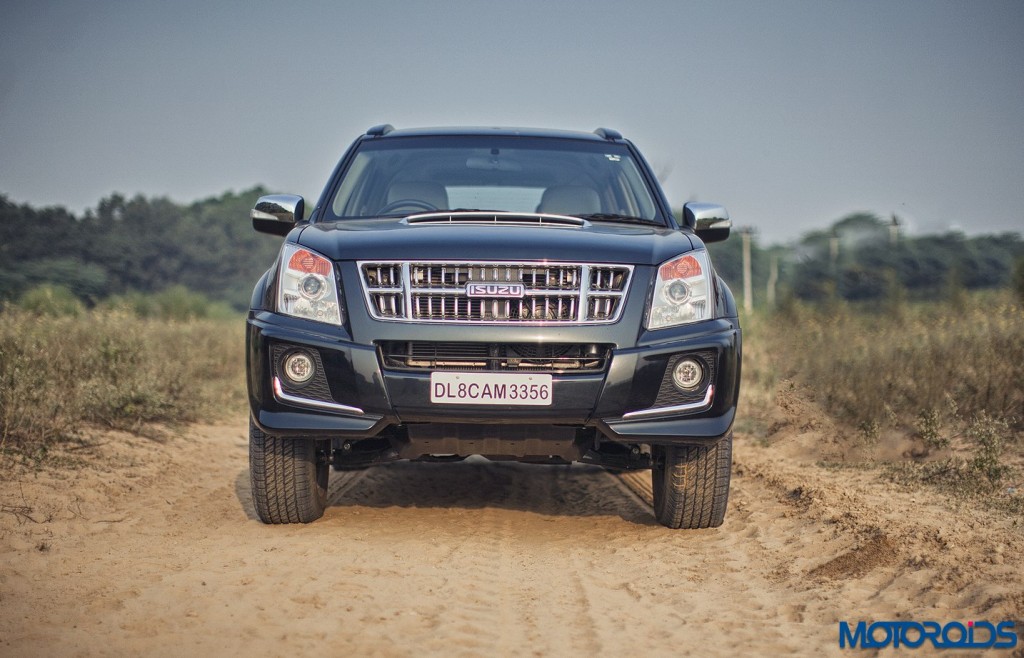 The Isuzu MU-7 is one such Goliath, which has the ability to get you awestruck with its sheers dimensions. While the SUV has been around for a couple of years now, the automatic variant was launched relatively recently in July. So here it is, our detailed review of this monstrous machine

SUVs are supposed to be big and brash. However with increasing fuel prices and traffic, even SUVs are being launched in ‘compact versions’. Not this one. The MU-7 is a huge machine, and commands a towering road presence. It’s a no nonsense design though, and doesn’t have any urbane pretensions – it’s built simple, built tough, and that’s what it looks like. The no-nonsense MU-7 was probably designed and built in the countryside by muscular men, for whom big is beautiful – which explains the SUV’s unapologetic butch looks and huge dimensions. 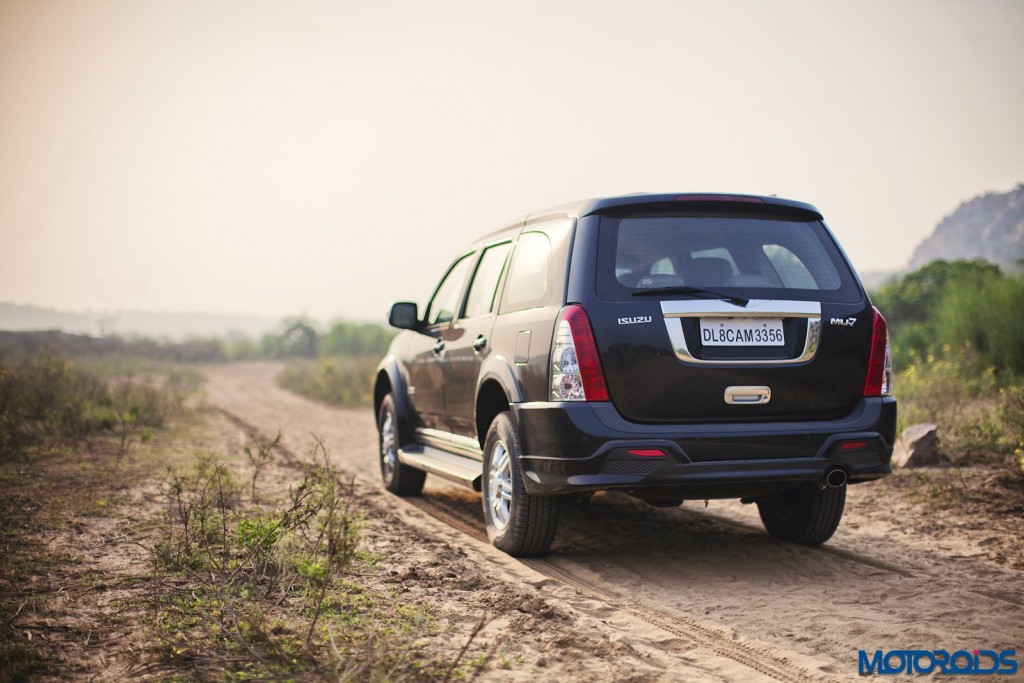 At 4955 mm it’s 250 mm longer than the Toyota Fortuner – that’s right, a full 25 cm longer! The front chrome grill gives the MU-7 its menacing, serious face. The menacing looks are further accentuated with the intercooler intake on the hood, high bumper and rectangular headlamps.

Get around and you see the flared wheel arches, though the 16 inch wheels look out of place in those large wheel wells, leaving a huge gap between the tyre and the arch. ORVMs get chrome treatment with integrated turn signals. Silver strips on window sills and chrome handles break the monotony of the solid color.

Get to the back of the behemoth, and you get simplistically styled, vertically stacked tail lamps along with loads of chrome around license plate recess. The boot handle, again, drenched in chrome sits beneath the registration plate recess, which isn’t the most convenient place to put a door handle. 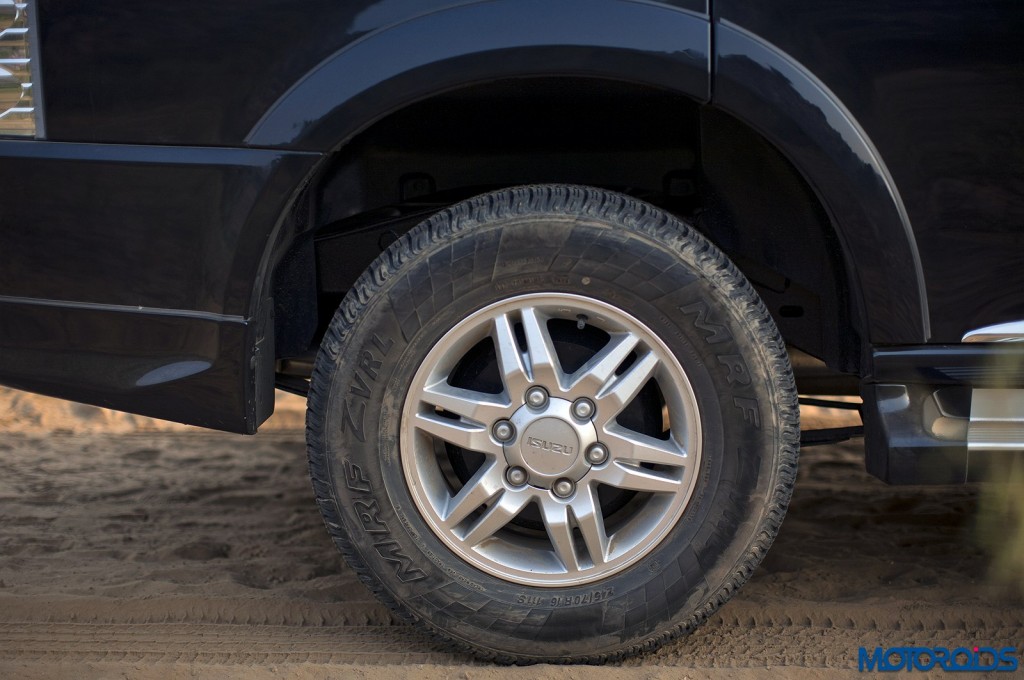 Get inside and you witness the 3 meter wheel base unravel acres of space inside the cabin. The interiors are spacious with comfy front seats, which are wide and provide good amounts of cushioning and comfort.

Dashboard is done in a dual tone theme with grey and beige elements. Quality of the interiors, however, isn’t up to the mark for a car sitting in this segment. It’s decent in places, appreciable in some other areas, and disappointing in others. Overall, one would expect better plastic quality and more amenities in a SUV north of Rs 20 Lakh.

The leather wrapped steering wheel gets audio and phone controls. They are not backlit, though, and at night we ended up switching the radio channel when we wanted to control the volume. 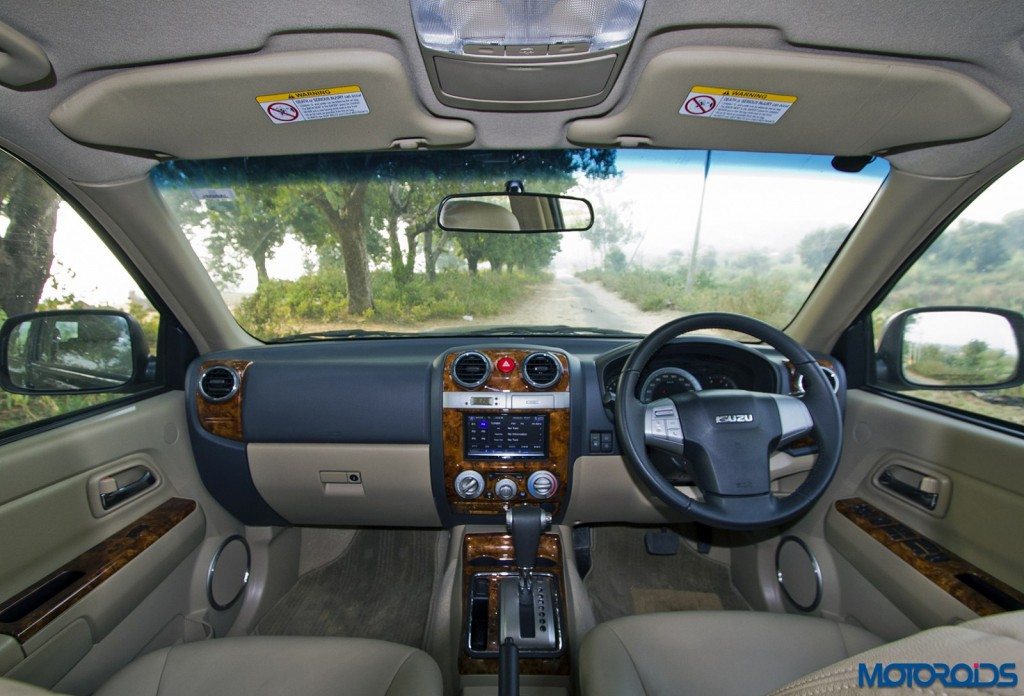 Another omission is automatic climate control. Central console has large knobs for AC control, which are quite convenient to use. The small buttons for AC on/off toggle and defogger however are disproportionate to the rest of the AC setup. The touchscreen multi-functional display controls the audio system, phone and is equipped with Sat Nav, which is a good feature to have. The controls on the central screen are very small and hard to operate, though. We suggest one uses the remote controller instead.

Rear seats are comfortable, have ample leg room and can be reclined. Though touted as a proper seven seater, the MU-7’s last row of seats is quite uncomfortable. This is where the pick-up origins of the MU-7 start to make their presence felt. Third row seats are a sheet of foam on the floor and one sits in almost a squatting position with knees coming to the chest level – making them genuinely uncomfortable for anything more than a very short journey. 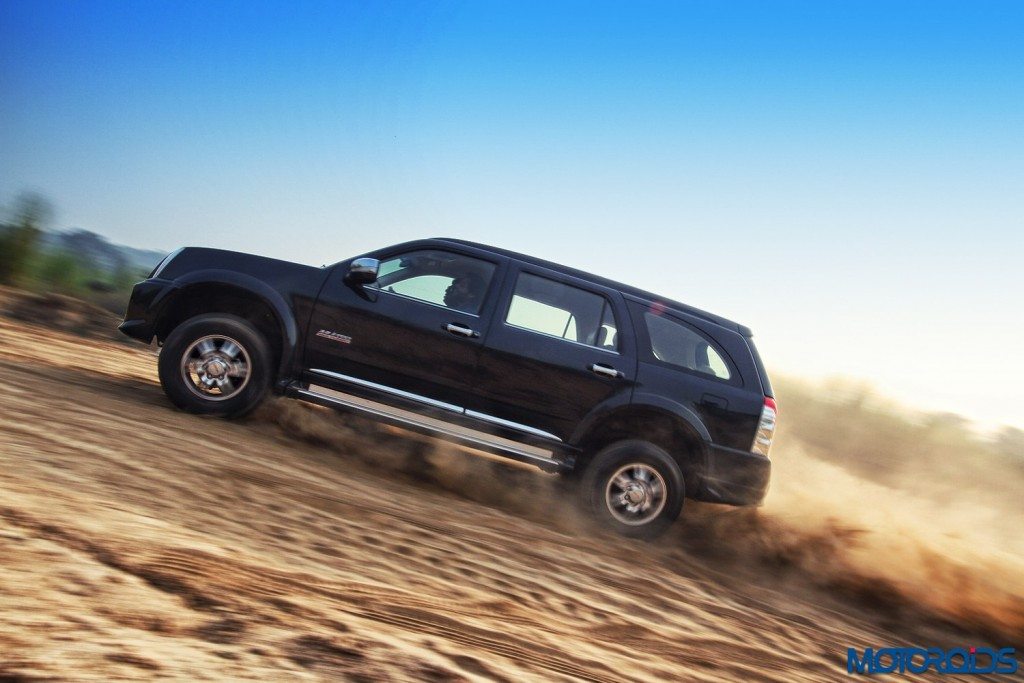 Turn the ignition on and the engine roars to life. The three litre turbo diesel unit feels smooth and vibration free as it idles. So while the engine feels vibe free and silent from within the cabin with windows rolled up, such is not the case in terms of noise. As you roll down the windows, the vocal character of the engine comes to the fore. The engine feels noisy throughout the rev range.

Shift into Drive mode, and the 3.0 litre 163 PS engine kicks in with its 333 Nm of torque produced at a low 1600-3200 rpm band. Engine feels linear, punchy and responsive right from the word go, pulling the 2.0 tonne giant with ease. Gearing is short, which means that the MU-7 is hassle free to drive in stop star city traffic. The performance in the higher revs isn’t bad either, though the engine noise does make you lift off after a bit. 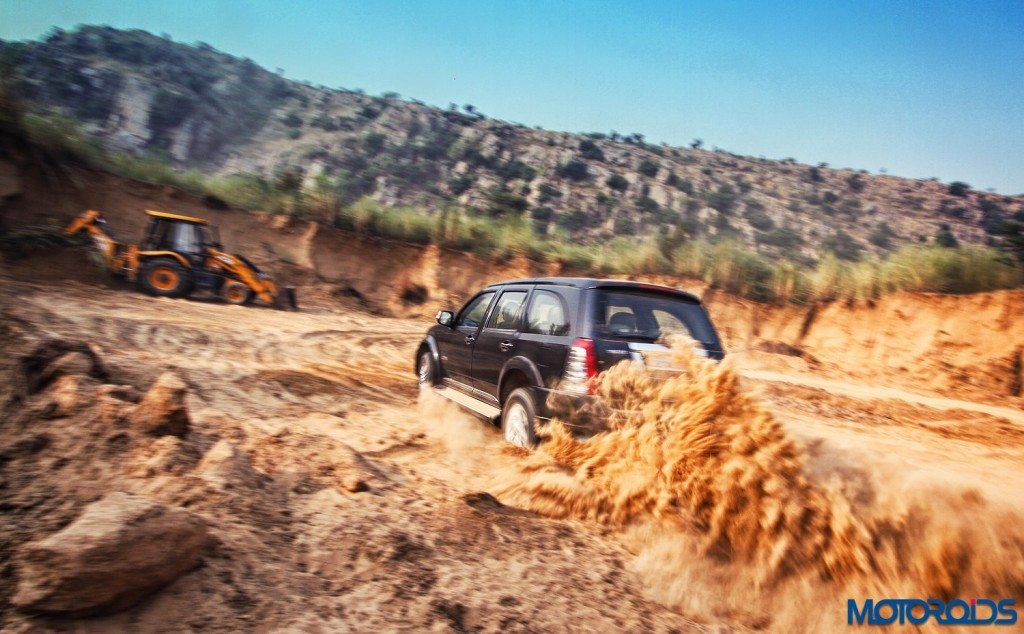 Under spirited driving, the gear shifts feel somewhat lethargic, and the hike in the revs doesn’t quite match the ground speed. With the VGT Turbo, the torque curve is flat, with hardly any turbo lag, which along with a good amount of torque does a good job of masking the deficiencies of the auto transmission.

The MU-7’s gets a chassis which is a body-on-ladder frame design. The longitudinally mounted engine sends the drive to rear wheels, featuring disc brakes up front and drums at the rear. Suspension is taken care of by independent double wishbone setup up front and a leaf-spring layout at the rear. Overall, the suspension is on the softer side, the body on ladder frame isn’t exactly meant to attack corners and the high center of gravity doesn’t help the dynamic ability much either. 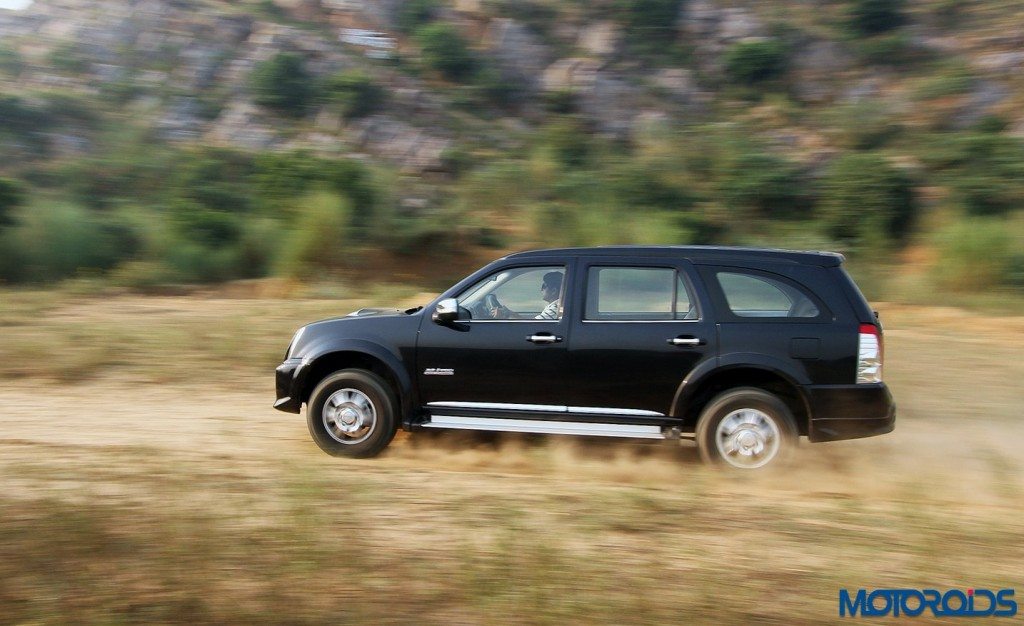 Having said all of that, the MU-7 feels predictable and can be positioned on the road with confidence for its class. It somehow doesn’t have that vague, floaty, dubious feeling that creeps in while driving a big, softly sprung SUV. The hydraulic steering feels well weighted and the car can be hustled to a fair degree as long as you know and understand its body type, chassis layout and other SUV-specific parameters.

The MU-7 has a large turning radius of 6.2 meters and that makes it a little cumbersome in our cities. One also has to work his arms a little bit with lots of turning of the steering. Even switching lanes requires more than a nudge on the steering wheel. The high ride and seat height gives a commanding driving position making maneuvering this mammoth in traffic relatively easily owing to good all-round visibility. If there’s one thing that the MU-7 will do better than others, is that it’ll clear the traffic ahead with just a flash of the headlamps. The traffic ahead just chickens away on witnessing that imposing figure in their RVMs. 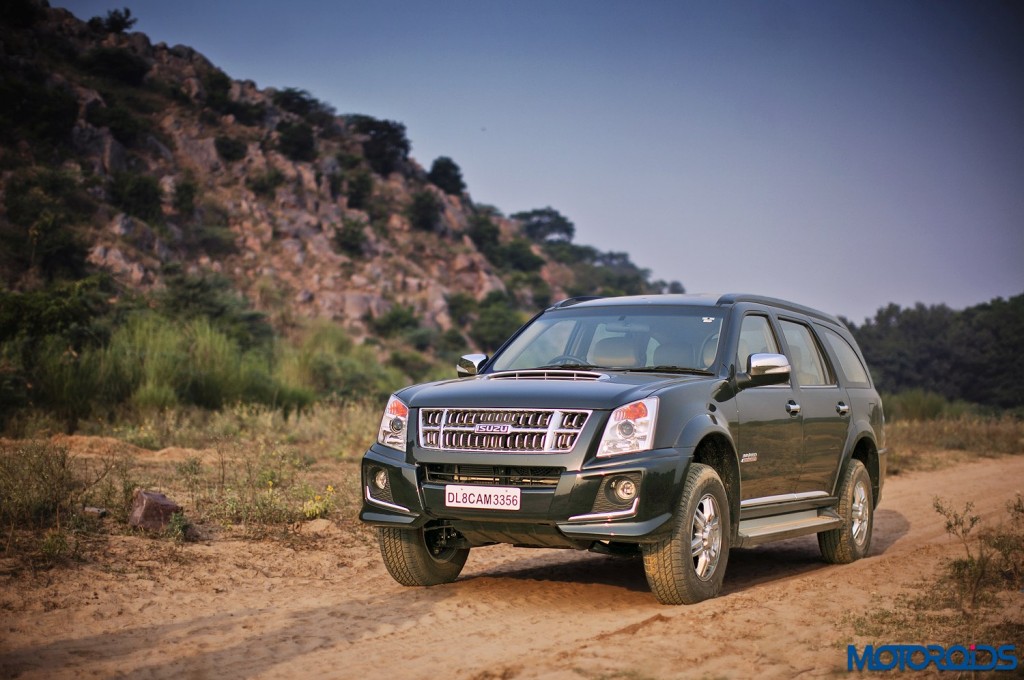 The brakes feel somewhat soggy and have a tendency to grab as you press the pedals harder. The soft suspension makes the nose of the car dive. You get to learn how to use them eventually, but this one doesn’t have the best set of anchors we have seen in this class.

This Isuzu takes pot holes and moderately rough roads in its stride with aplomb, gliding over them with ease. In the rear, the MU-7 gets rigid leaf spring suspension with gas sealed shock absorbers, making the ride decently comfortable. However, the ride does get considerably bouncy on uneven road surfaces, especially for the rear passengers. Overhang in the rear is quiet high with last row right over the rear wheels and the ride would be even more bouncy in last row. 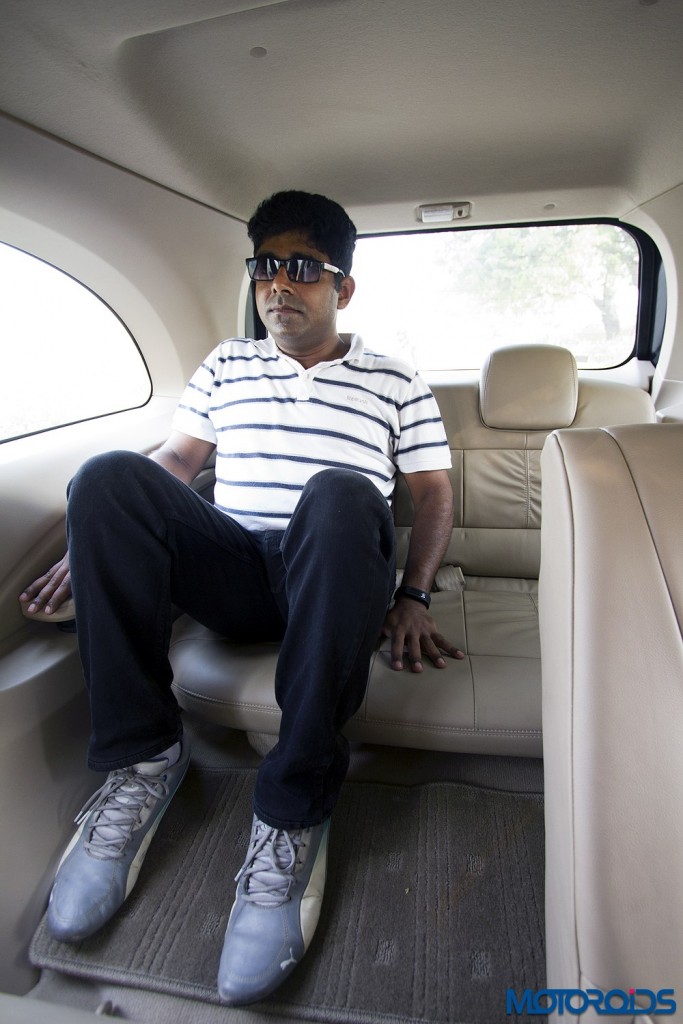 We tried our hand at a bit of off-roading around Damdamalake, a serene lake not too far from Delhi. The MU-7 took the sandy trails with ease and we could make our way through the boggy surface without any trouble. The Isuzu MU-7 would take you to places which a lot of modern urban SUV’s can’t. Considering that this a rugged SUV with off-road going capabilities and a punchy engine, it would be a great tool for adventure travel with space for your adventure loving family or friends and all the tents and sleeping bags.

This is when we realize that such a capable off roader should have a 4×4 option for those who want to go beyond the beaten path. We understand that India is not a huge market for 4×4 versions and most SUV’s never see the roads they are meant for. However, with the Isuzu MU-7, we really wish this option was available. Not only will it make its position in the market unique, it would address the needs of those who end up with less practical or SUV’s for want of a 4×4. 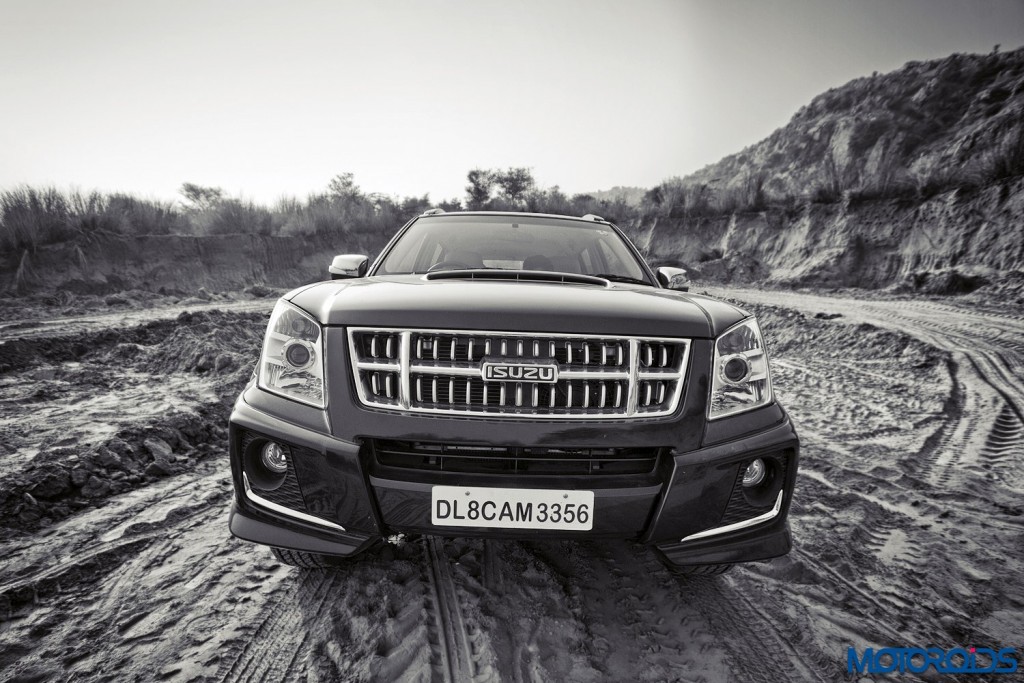 Isuzu is known to make some of the best diesel engines, and some of the most rugged trucks anywhere in the world. The MU-7, too, has that built to last, tough, rugged feel to it, and can be a serious option for those who tread the untrodden territories more often than others. A bit more style and equipment with a slightly smaller price tag may do wonders for this savage beast though.

In its current form, though, it may not appeal too much to a vast majority of the audience, who are warming up to the more urbane styling of these behemoths.

Here is the complete image gallery of the Isuzu MU-7 AT: