Home Hyundai Is this how the 2014 Hyundai i10 sedan would look like?

There have been plenty of speculations saying that Korean auto giant Hyundai could be contemplating coming up with a compect sedan to challenge the likes of Suzuki Swift Dzire and Honda Amaze. It has now suddenly emerged that the upcoming compact sedan could very well be based on the recently unveiled 2014 Hyundai i10/Grand i10. Seen here is a speculative rendering of the 2014 Hyundai i10 sedan by the good folks at IAB. 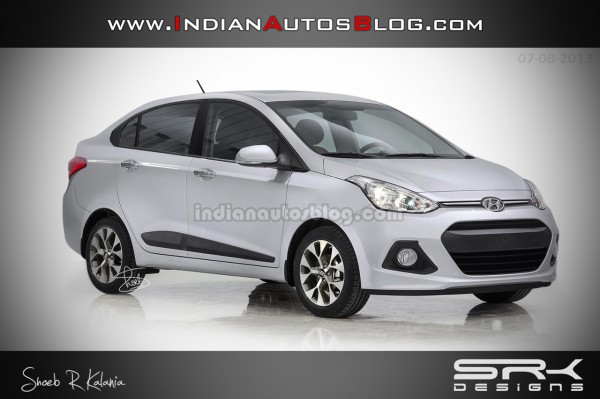 As is obvious, the 2014 i10-sedan would measure little less than 4-meters in length and would be built on the same BA platform that underpins the soon to be launched Grand i10. Engine options too are likely to be borrowed from the Grand i10. However, a possibility of the car getting the i20’s 1.4 litre CRDI diesel engine can’t exactly be ruled out. The petrol variant, however, is sure to be powered by the 1.2-liter Kappa2 engine.

While the car will look much like the either of the two new i10s, there are good chances that it could get some design cues from HB20S, especially for its rear end. The HB20S is a Brazil-exclusive compact sedan and is highly based on the i20 hatchback that we have on sale in our country.

The 2014 Hyundai i10 sedan could be launched sometime next year.

Safely expect the car to get a price tag that would undercut that of the Honda Amaze.

Stay tuned to Motoroids for more info on the speculated 2014 Hyundai i10 sedan.

Click here to know more on the recently unveiled 2014 Hyundai Grand i10.