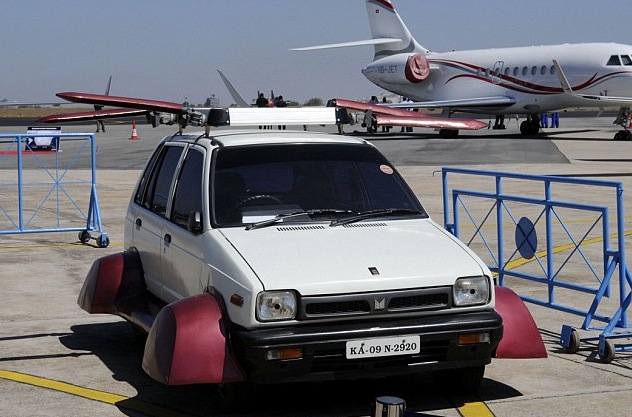 There have been many attempts at making a flying car. Some of the recent exponents of humans’ attempts at flying car are Terrafugia Transition, Parajet Skycar, Moller Skycar M400 and a few others.
Now an Indian inventor is claiming to have made a flying car out of the original people’s car of India, the Maruti 800. London based AK Vishwanath claims to have developed the car through his outfit called B’Lorean – a hybrid of the famous D’Lorean car and his home Blore, the residents of which are sometimes called B’loreans. Mr Vishwanath says that he drew inspiration from the flying ability of bees for the car, and that a team of engineers is continuously working on the project.

The car has rotor blades affixed to the roof. The wheel arches of the car have special extensions which are used for creating vacuum. The car was showed at Airo India 2011 where it managed to grab more eyeballs than some of the most sophisticated fighter jets.

AK Vishwanath, who is 52 years old, claims that the car can lift off vertically from ground, and that it has been tested in a wind tunnel as well. The inventor has bagged 40 patents for his unique design.
While we have not seen the car taking off, we are on the hunt. We will try and get in touch with Mr. Vishwanath and bring you more info on this amazing invention.