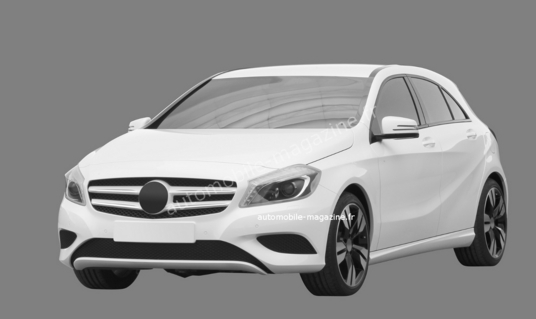 A few days back we told you that Mercedes is seriously considering bringing its 2012 A-Class and B-class car models to India. In a matter of days, the first images of the hitherto unseen A-Class have hit the web. The source? Well, they have managed to find some fissures in the air tight walls and digital cables of the European Patent Office.

The car largely stands true to its A-Class Concept design, however the stylish chrome mesh grille on the show car is replaced by twin horizontal slats holding the triple pointed star emblem in place. The rest of the styling cues have also been sobered down a bit for the real world.

Only exterior pictures of the car have been revealed, with no info whatsoever on the cabin elements. But expect top-quality interiors staying true to Mercedes tradition with the trademark COMAND system sitting smug in the center console.

The A-Class will be powered by a 2.0-liter turbocharged four-cylinder petrol engine with 210PS. Transmission duties will be taken care of by a dual clutch transmission, delivering power to the front wheels. Yeah, you heard it right, this won’t be a RWD like other Mercs.

An AMG variant of the car will also hit the scene with power in the region of 340-350PS. Enjoy the pics and the video of the A-Class concept thereafter