India’s largest Festival planners the SEVENTY Event Media Group, together with the #1 Travel and Lifestyle channel FOX Traveller today announced the second edition of India Bike Week (IBW), the biggest congregation of bikers in India. The annual Festival of Bikers, Bikes, Music & entertainment, will be held in Goa from January 17 and 18 in 2014.

Modelled on the ‘Sturgis Motorcycle rally’ in South Dakota that attracts thousands of bikers every year, India Bike Week aims to be the largest rally of Bikers in India’s history. From Café Racers to Scramblers, Cruisers to Superbikers, this annual event celebrating India Biker’s brotherhood, will bring together over 10,000 fans including some of India’s biggest biking celebs to Goa, soaking in Indian and international biking trends, new bikes launches, products and accessories, music and entertainment. 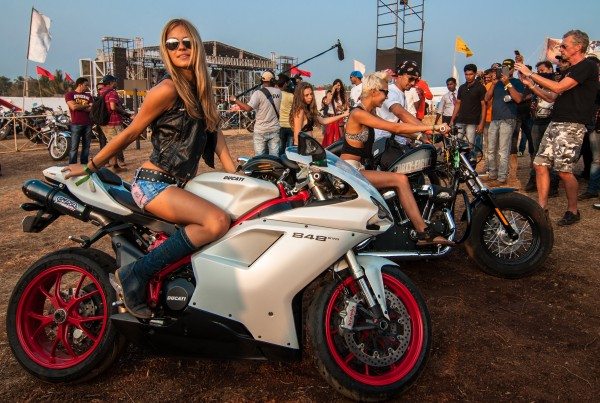 6,547 bike enthusiasts attended IBW 2103, with over 3,000 bikers riding down from all over India to Goa, along with a considerable number of women bikers. India Bike Week 2014 will be the only destination for hard core bikers, fans of the two wheeler way of living, travellers, music fans and festival goers. In 2013, it featured the Y2K Turbine engined bike, 3 concert stages, 28 live bands and DJs, 5 bars, 16 cage fighters, Bike Build Off, international stunt specialist Mattie Griffin and hundreds of exotic and custom bikes. IBW ’13 also featured a Stunt Arena, Big Trip Cinema, Vintage & Custom Bike display), Biker Flea Market, Dirt Track Racing, an extensive expo area and many legends and noted bikers who set the stage for the biking community in India.

Martin da Costa, CEO of 70 EMG said “In 2013 we set out to create the largest Festival for Bikers and Bike fans in India’s history, and we were overwhelmed by the response. It was amazing to meet with the thousands of guys and girls who had ridden from all over India to party with us. We’ve been working all year to create the second India Bike Week, and it’s looking amazing already. This is already India’s biggest carnival for all the hard core bikers, fans of the two wheeler way of living, travellers and India’s many music and Festival Fans. In 2014, it’s going to be a great party, and we’re talking to the hundreds of Bike Clubs in India, as well as international Bikers, brands, customizers, bike and accessory manufacturers, and musicians to make this an amazing week. It’ll be a one hell of a ride!”

Mr. Keertan Adyanthaya, MD- FOX International Channels said, “We are very excited for the second leg of India’s leading Biking festival ‘India Bike Week’ at the biker haven- Goa. We proudly believe that it is this love of pure unadulterated motorcycling that brings the riders together from all over the world and bond over their common passion of riding. The festival will celebrate individuality and freedom, words which are synonyms with biking and bikers. India Bike Week will personify everything that is close to a biker’s heart – from rock music to some of the coolest and meanest biking machines. We hope to inspire a new generation of bikers and make India Bike week an annual property for the biker community in India.”

India Bike Week celebrates the spirit of the Indian Biker and will be held in Goa on 17th & 18th January 2014. Priced at Rs. 3,000,the ticket sales begin on September 27. An Early Bird discount of 10% is on till October 31 and the first 1,500 buyers will receive a complimentary IBW T shirt worth Rs. 300 Tickets are available on bookmyshow.com today onwards, and at Harley-Davidson showrooms across the country from October 1.