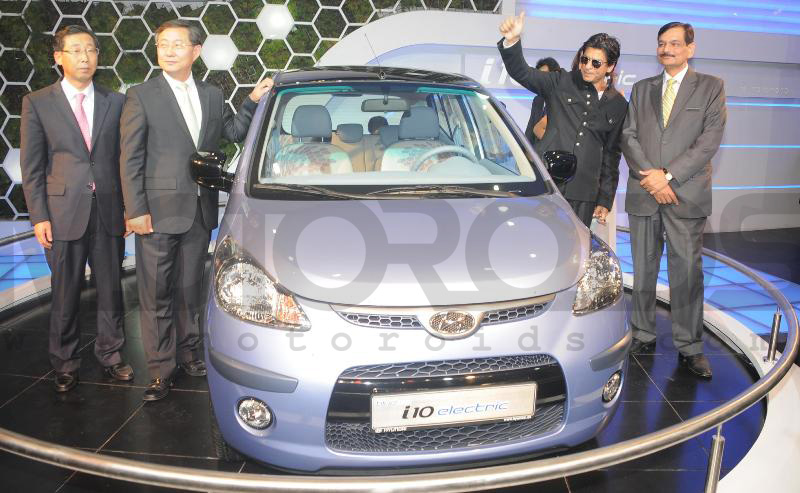 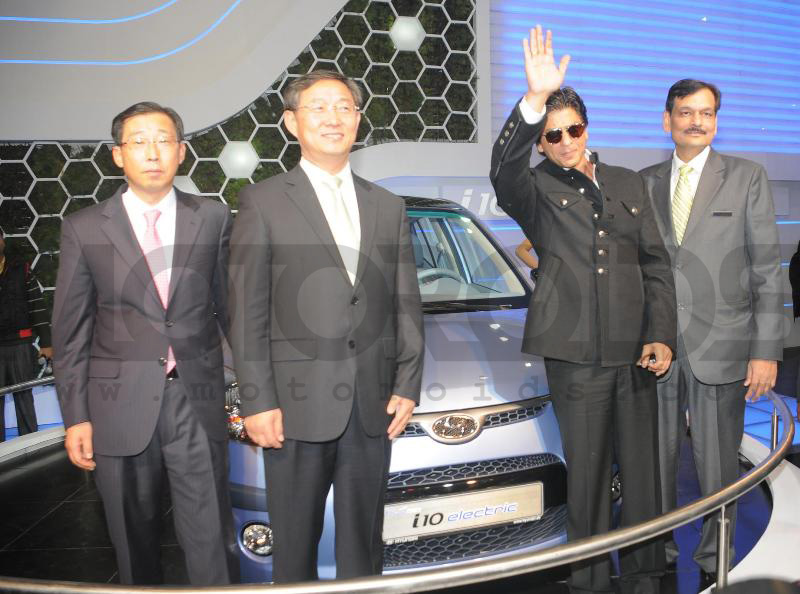 Powered by a 49kwh electrical motor and a 16kwh battery

The i10 electric uses advanced LiPoly (Lithium-Ion-Polymer) batteries which offers numerous advantages over other batteries.

The Hyundai Genesis sedan which was first launched in the Korean and the North American market won many accolades for itself including the coveted title – ‘North American Car of the Year 2009’ and the prestigious ‘Canadian Car of the Year 2009’. On display at the Hyundai pavilion this year will be the all new high performance Genesis Coupe – the sports variant of the Genesis sedan with focus on performance and luxury. The new Genesis Coupe highlights upscale new design, responsive driving dynamics and class-leading technology. The Genesis Coupe which followed the Genesis sedan comes in two performance-focused engine variants – a 212-horsepower, 2.0-liter turbocharged four-cylinder engine and a range-topping all-aluminum 306-horsepower, DOHC 3.8-liter V6 engine with the new rear wheel drive architecture. 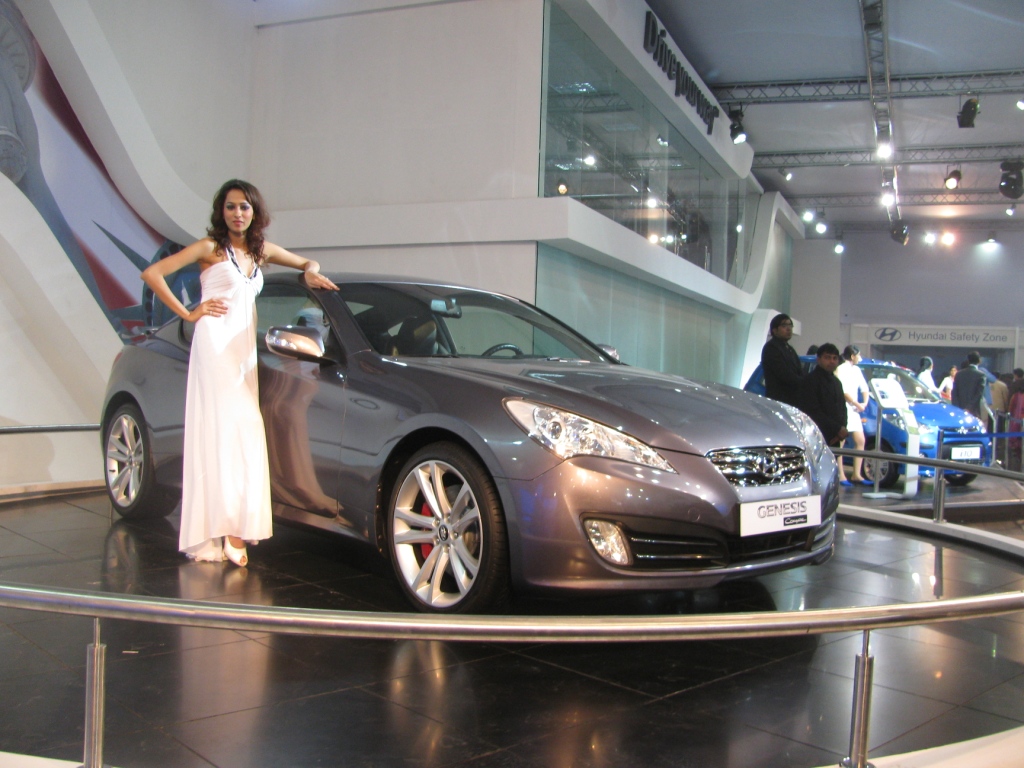 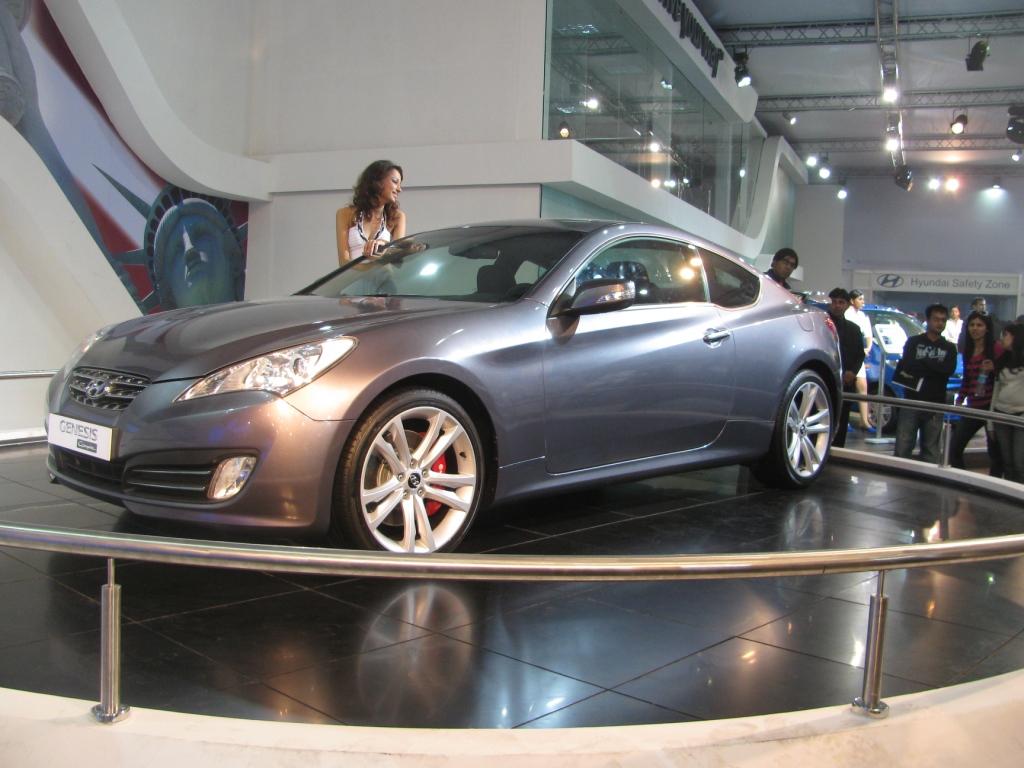 The car has been built using Makrolon® polycarbonate. It reduces the weight of the vehicle, is less expensive than steel and reduces costs, and is design friendly. The car is covered with a polyurethane based coating which melts owing to the heat from the sun causing minor surface scratches to melt away. This concept has been created by Hyundai in collaboration with Bayer Material Science AG. The LED headlamps also have lenses made from Makrolon® polycarbonate. It gathers the light rays and directs them on the road ahead. It is lighter, tougher and more heat resistant than glass. The ‘i-mode’ which is set to take the stage with its amazing blend of visionary styling, futuristic technologies and advanced eco-dynamics. The car was first showcased at the Geneva International Motor Show in March, 2008. This innovatively styled and eco-friendly vehicle with its impressive mono-volume architecture provides an invitation to travel, explore and relax within the concept of a moving cocoon. Powered by the Euro 6 ready all-new 2.2-liter R (Dual Turbo) diesel engine, the i-mode concept incorporates high-tech materials, swivel seats and state-of-the-art communication solutions into a completely new vehicle impression. 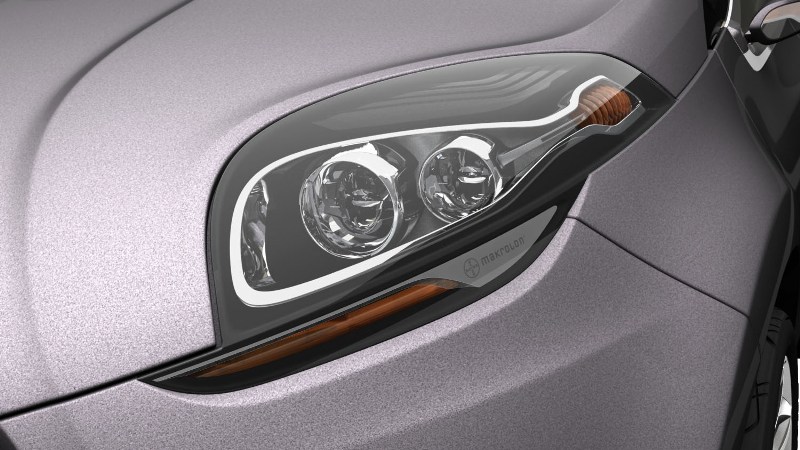 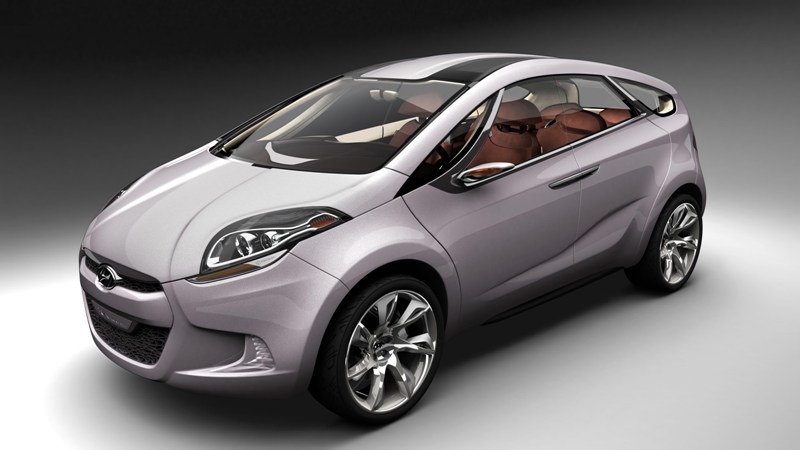 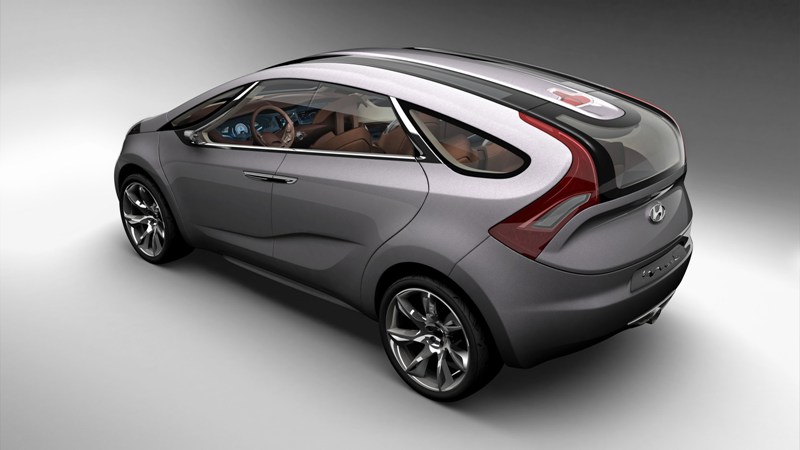 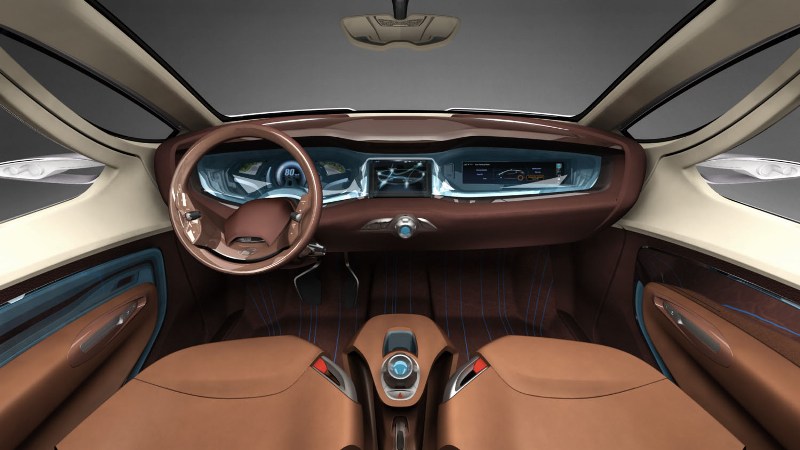 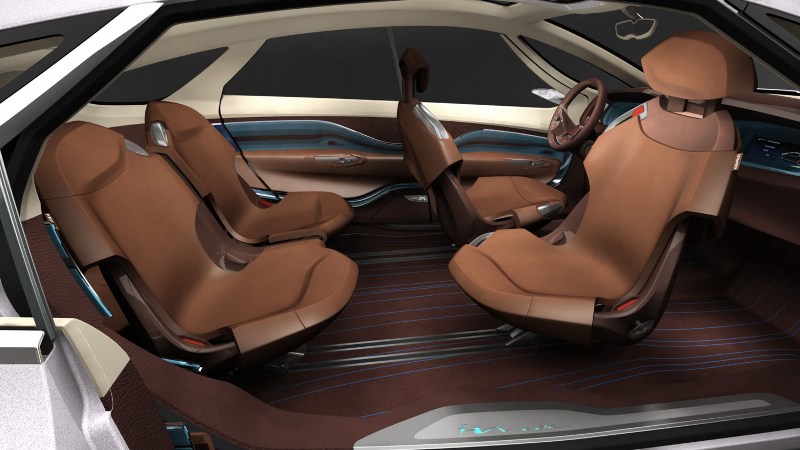 Here are some more pics of the newly unveiled Hyundai i10 Electric. Details coming up soon… 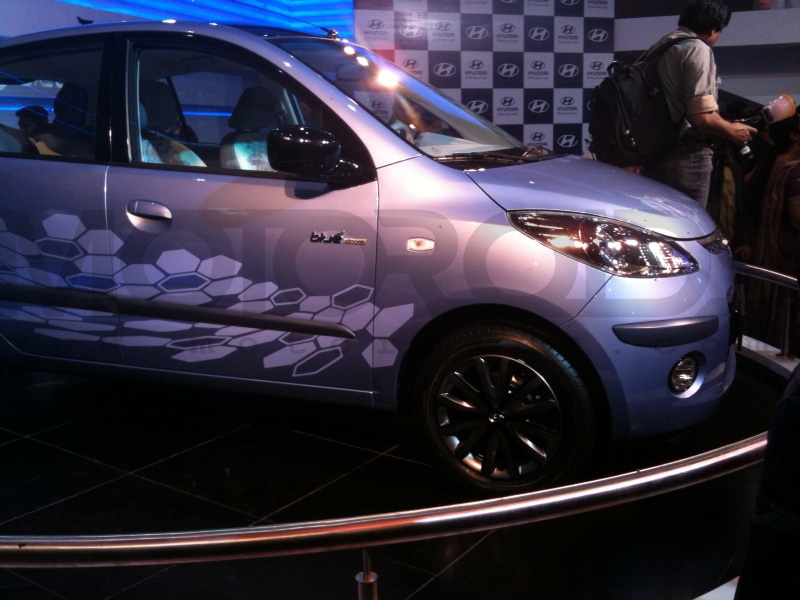 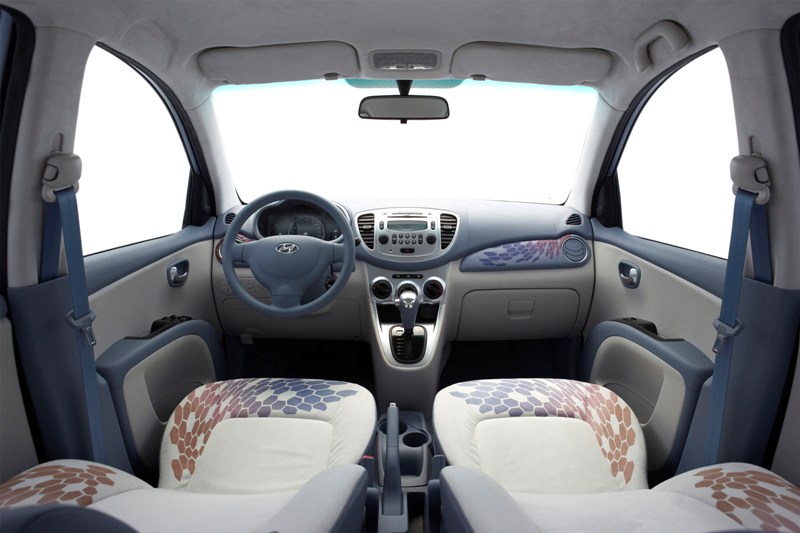 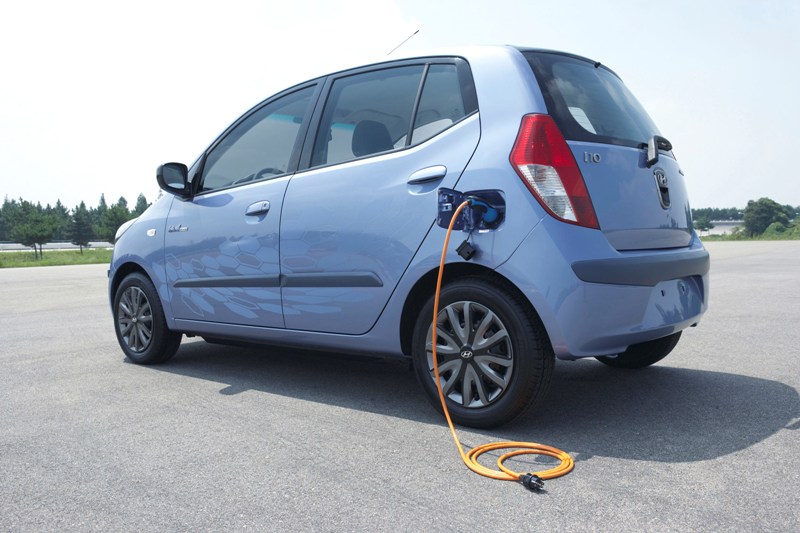 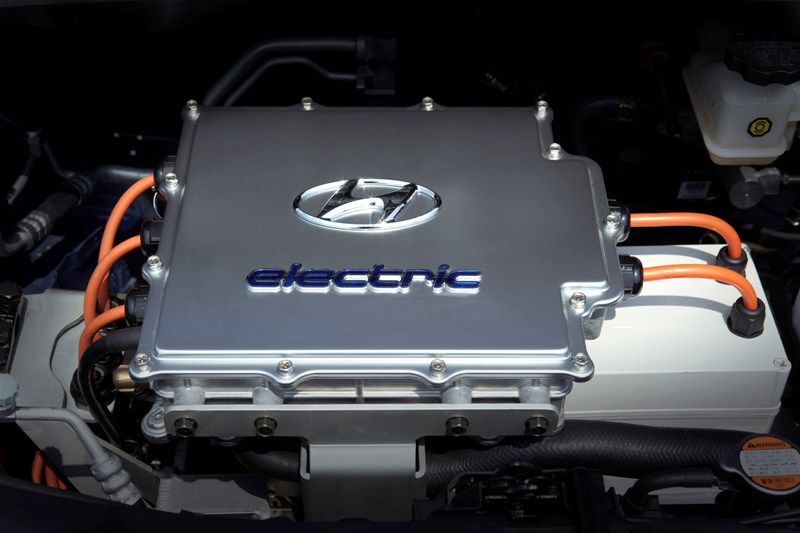 Hyundai has just revealed the i10 Electric at Auto Expo, New Delhi. The i10 electric will be launched first in Korea by the end of 2010 and will eventually be launched in the country.

Reportedly, the i10 Electric takes about 15 hours to get completely charged and about 5 hours to charge 80% of it’s capacity.

Hyundai has just unveiled its new H1 Wagon, at the Auto Expo in New Delhi. The H1 is a the comfortable and convenient, spacious and flexible, stylish and luxurious van from Hyundai. With a choice of nine or twelve seats, the H-1 Van is at home in a variety of business and leisure roles – as a hotel shuttle, for tourists on sight-seeing trips or for taking sports club members (and all their gear) to the big event. And because it’s a Hyundai, reliability and economy are part of the DNA. 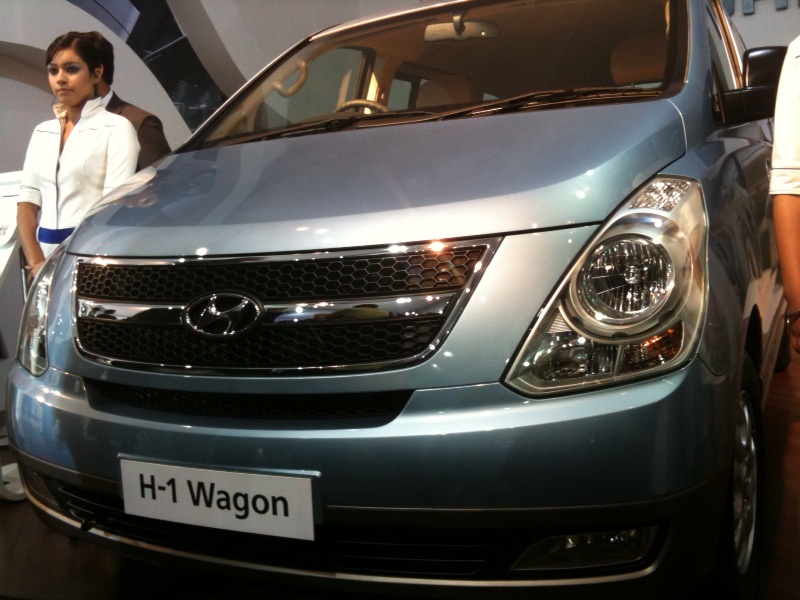 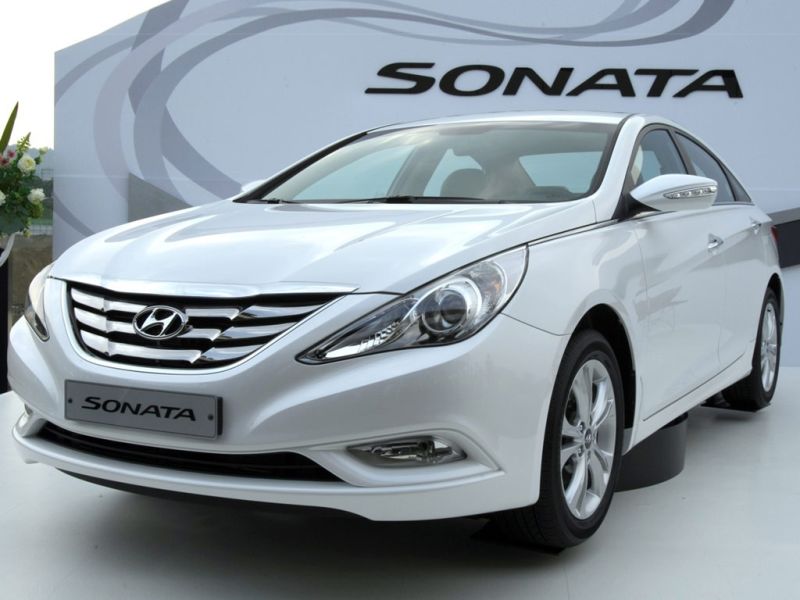 Hyundai has been trying to make it big in the D segment for quite some time with its Sonata. While the first Sonata in India tried to capture some eyeballs by emulating the British Jaguars, the second generation cars looked more like a reflection of the Honda Accord. In either case, the Sonata suffered from an identity crisis and hence could never make it big in the D-segment.

The new Hyundai Sonata, launched internationally a little more a year back, is different though. In its newest iteration, the new Sonata (also known as the Sonata YF or the Hyundai i40 in Europe) gets a totally fresh and utterly exciting design which is sure to make some heads turn.

The development of the new Sonata went underway in 2005, and the estimated cost of development was about (US$ 372 million). The Korean version of the car has a 2-liter Theta II MPi gasoline engine producing 165PS of peak power and about 200Nm of peak torque. The new car is claimed to deliver 11 per cent better fuel efficiency than its earlier version.

There is another engine variant for the US market which boasts 2.4-litre of displacement with around 200PS of power and 250Nm of torque. This engine too is a part of the Theta II (Theta 2) engine lineup. All engines are offered with a new six-speed automatic transmission. Apart from the new automatic tranny, a 6-speed manual transmission is also available. 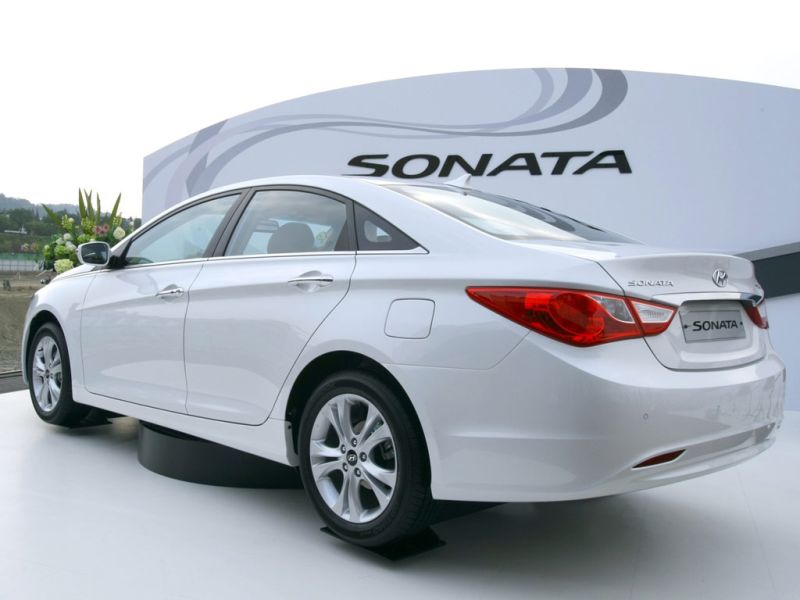 Apart from the petrol engines two diesel (2.0L and 2.2L R-diesel engines) with power outputs ranging from 150 to 200 horsepower are also available. We think the 2.0-litre diesel producing around 150PS of power is the powerplant for India.

Like all new cars rolling out of Hyundai’s design studios, the new Sonata too adopts Hyundai’s new “fluidic sculpture” design language, and features the new hexagonal grille which is a standard design element on all ne Hyundais now. The new car is claimed to have better performance, better safety features and better fuel efficiency. The use of ultra high-strength hot-stamped sheets for its construction is another highlight.

Internationally, there is a wide range of variants available for the Sonata. We don’t expect more than four variants making it to India though – two each for the petrol and diesel versions. Expect the cars to hit the Indian tar by mid 2010.

It’s been about three years since the i10 was introduced in the Indian market. The car has done wonders to the sales of the Korean company in India as well as internationally. While we think that the car is still too new to undergo a complete overhaul or replacement, a facelift is definitely on the cars. While we don’t have any clue about what the new version of the car will look like, we are sure that it’ll include only cosmetic upgrades to the headlamps, bumpers and the grille with a few possible alterations made to the interior as well.

Hyundai will also display an electric i10 showcasing its prowess in developing an emissions free compact car. The manufacturer has taken steps in the past to promote eco-friendly or alternate fuel powered vehicles. Hyundai has already offers the option of Santro LPG & CNG, Accent LPG & CNG and  i10 CNG to buyers is India. 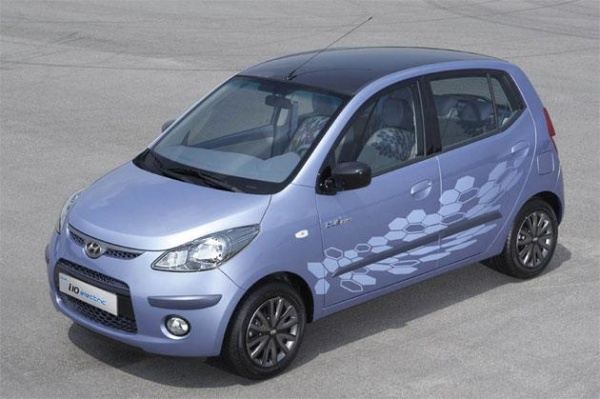 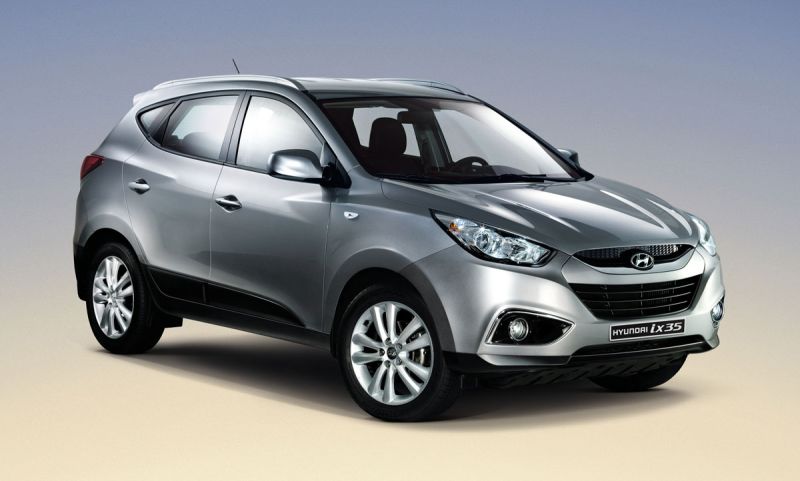 The old Tucson made for a good SUV. People who bought it still vouch for its quality and reliability. However, owing to Hyundai’s image as a small car maker and the price tag of about 17-odd lakh rupees the SUV didn’t sell in high enough numbers.

With the new Hyundai Tucson, also known as the Hyundai ix35 in Europe, the Korean company has created something totally from scratch and received a lot of accolades for its fresh design and upmarket appeal. The new Tucsom is based on the Hyundai ix-onic concept which was originally conceptualized by former BMW designer Thomas Buerkle at Hyundai’s Russelsheim design studio in Germany and complies to the company’s new “fluidic sculpture” design philosophy. The new vehicle features sporty, coupe like lines and comes packed with features which are far more advanced than its predecessor. Here is a list of some of the new features on the Tucson. 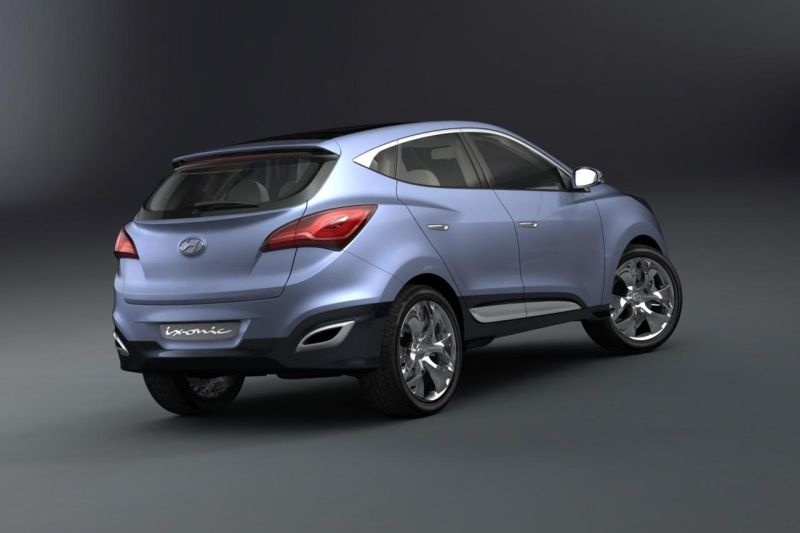 Downhill Brake Control and Hill-Start Assist Control: DBC allows the vehicle to maintain a safe speed on steep declines without having to use the brake while the hill-start assist helps a driver move up a steep or slippery hill without rolling backwards.

Emergency Stop Signal: In case of emergency braking, the hazard lights automatically come on  to alerts the driver behind reducing the risk of crashes from behind.
Panoramic Sunroof
Rear view camera

The engines powering the new Tucson are the same as the ones on the Hyundai Sonata YF. The 2.0-litre Theta II (Theta 2) petrol and an all-new 2.0–litre diesel R producing 165 PS and 184 PS of power respectively. Both the engines will be mated to Hyundai’s all-new six-speed automatic and manual transmissions. The diesel engine is claimed to return a real-world efficiency of around 15kmpl which is impressive for a vehicle of the Tucson’s size.

The Tucson is internationally offered in both front-wheel-drive and all-wheel drive configurations, while the petrol variant is available only in front-wheel-drive. Expect a price tag of around 20 lakh rupees when the vehicle in launched in India.

The auto Industry has been abuzz with the talk of Hyundai planning to come up with a sub-Santro car to tackle the threat imposed by the Nano and to hold the chariot of the bestselling Alto. We expect Hyundai to display their new Santro or a smaller car that they have been working on in the Expo. The current Santro has been around since ages now needs a replacement to become Hyundai’s saled leader again – a spot it lost to the Hyundai i10 recently. 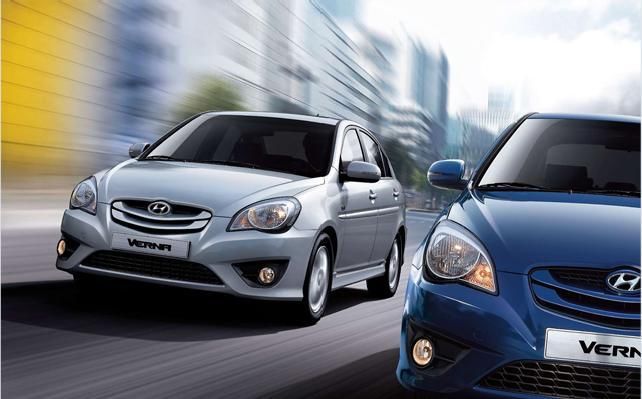 We expect Hyundai to exhibit the new Hyundai Verna at the Auto Expo. Hyundai released the pictures of their facelifed Verna a few months back. While no mechanical changes have been made to the new car a lot of new plastic has been added to both the exterior and the interior of the car. The new version features a redesigned front bumper and grille along with a pair of redesigned headlamps. The exercise seems to be an effort to add some character to the painfully drab exteriors of the current version. The new design looks surprisingly aggressive, especially when viewed front on…
We’ll let you know all the details if and when Hyundai exhibits the model at Delhi.

The regulars
Apart from the new cars, we expect Hyundai to display quite a few concepts and the under-development cars which will probably make it to the India soil in the times to come. Some wacky concepts of the current production vehicles in India (e. g. like a rally version of the i10) may also be exhibited. 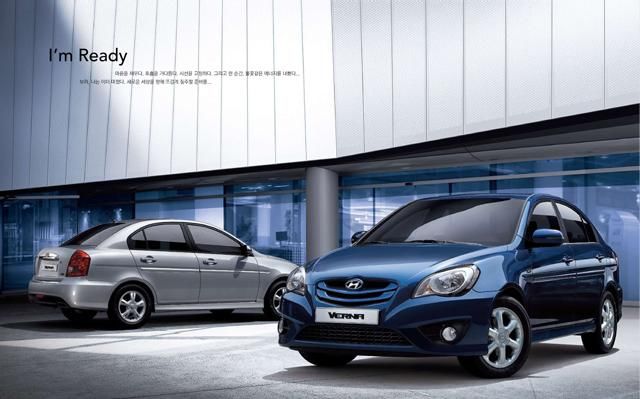