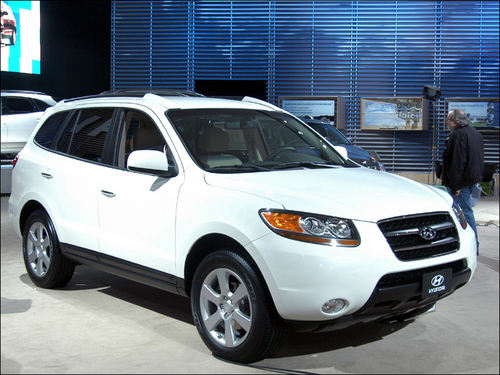 Hyundai Motor India Limited seems to have made up its mind to launch its SUV Santa Fe in India by October this year, reports Business Standard. The car is slated to be priced between 20 to 22 lakh rupees. We expect the car to be powered by a 2.2-litre CRDi diesel good for around 155 horses. The car will contend with the likes of the CR-V and Fortuner when it’s launched. There is a 2.4-litre petrol option as well, but knowing the Indian market, we can safely assume that Hyundai will go with the diesel variant.

Apart from this, the company also looks keen on launching a new version of its Elantra – a car which didn’t fare too well in the country during its first stint. The car was phased out in the year 2007 owing to its low sales. “We are reviewing the relaunch of our Elantra in the country which will be subject to the growth in the market size of the premium segment,” company’s Senior Director Y K Koo was quoted as saying. “Santa Fe may be launched in the month of October and its price can be in the range of Rs 20 lakh to Rs 22 lakh which will be very competitive,” he added later. Mr. Koo did not reveal the probable launch dates of the car though. “The market for premium segment in which Elantra fits in is just 3 per cent of total market size of cars in the country. But this market is growing,” he said. According to Mr. Koo, Hyundai has invested close to Rs 70crore in developing the Verna Transform, and in the new avatar, its sales are expected to jump to 2000 units per month from the current 1500. Hyundai is one of the fastest growing companies in India with a growth rate of 31 percent against the industry’s 27 percent. To further boost growth, the company plans to take its dealer strength to 310 from the current 290.