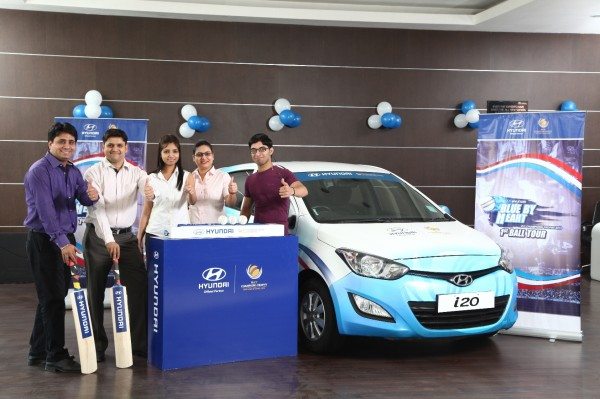 The first ball preview is organised at Hyundai showrooms from May 30 to June 4, 2013 in New Delhi (May 30-June 2), Mumbai (May 30-June 2), Chennai (June 1-2), Kolkata (June 1-2), Dehradun (June 1), Pune (June 3-4), Ahmedabad (June 4), and Chandigarh (June 4). This ‘First Ball’ showcase was conceptualized to bring together the cricket passionate fans and provide them with an opportunity to celebrate the moments of the ICC Champions Trophy 2013 in England. The representatives from Hyundai will hand over the set of balls to the match umpires prior to the opening match between India and South Africa.

Mr. Rakesh Srivastava, Sr. Vice President, Sales and Marketing HMIL, said, “HMIL is passionate about its association with ICC for all cricketing events as an official partner till 2015. With the showcasing of the ‘First Ball’ for the ICC Champions Trophy 2013, we aim to reach out to our customers and provide them with an unique experience to connect with the tournament while building up the momentum for the cricketing extravaganza.”

The ‘First ball’ will travel through 8 cities before reaching its final destination in England. The cricket balls will be displayed in specially branded Hyundai cars at Hyundai Showrooms. Special activities are being organized at the dealership in each of these cities, which will include games and quizzes on cricket trivia and contests on juggling balls. Further to this, all the fans can pen their thoughts on the cricket balls provided by dealerships and cheer for their favourite teams. All these balls will be collected from all over the country and a mega Hyundai Good Wish Wall will be created at Hyundai ICC Fan Park in Delhi and smaller replica of wish wall will be showcased at various Fan Parks across the country.

Additionally, the Fans can visit the Hyundai showroom for a preview of the Cricket Balls. The fans can also follow the current location update of the Balls on Hyundai’s Facebook page (facebook/HyundaiIndia) and Twitter handle (@HyundaiIndia).

During this season, Hyundai Motor India in association with ESPN Cricinfo has brought a lifetime opportunity to all true cricket fans with, Hyundai Cricjockey. As a part of the special ‘Blue by Heart’ campaign (www.bluebyheart.com), Hyundai Motor India would organise a contest which would be available on online and mobile platforms. Cricket fans need to watch a cricket video and submit their commentary. Winning Hyundai Cricjockeys will get an opportunity to see the actual ESPN Cricinfo Studios in Bengaluru, where they would learn the entire cricket reporting procedures and also get to do Live Google+ Hangouts with the Editorial Team of ESPN Cricinfo during the champion trophy matches. The grand winner will get an opportunity to write an entire cricketing blog on the main ESPN cricinfo website. Apart from these Cricjokeys would also get prizes like smart phones, tablet and music players.

As a part of the campaign for ICC Champions Trophy 2013, Hyundai had earlier during the month commenced the ‘Trophy Tour’ which was held in New Delhi, Mumbai and Chennai.