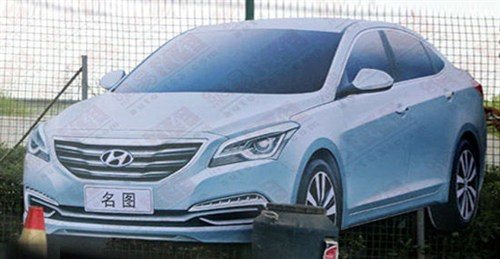 It is a pretty well known fact that the Korean auto giant Hyundai is planning to launch a new sedan in China. This sedan would sit between the Sonata and the Elantra and will cater to the fast developing D+ segment of the Chinese car market.

There have been many speculations regarding the launch of the upcoming sedan’s design. However, what we have here today is the first pic that clearly shows the design of the upcoming car. The pic seems to have been taken from some billboard placed near Hyundai’s stall at Auto Shanghai. The new sedan will make its public debut at the Auto Shanghai within a few days. The car, which was earlier being expected to be called as Sonata Lite, has been named as Mingtu.

The Hyundai Mingtu benefits from Hyundai’s aggressive design language and looks chic with a swooping roofline and a front fascia that seems to have taken design cues from the Sonata.

Powering the car will be 1.8 litre and 2.0 litre petrol engines that will be mated to 6-speed manual or automatic transmissions. The Hyundai Mingtu is expected to go on sale for 180000 Yuan.