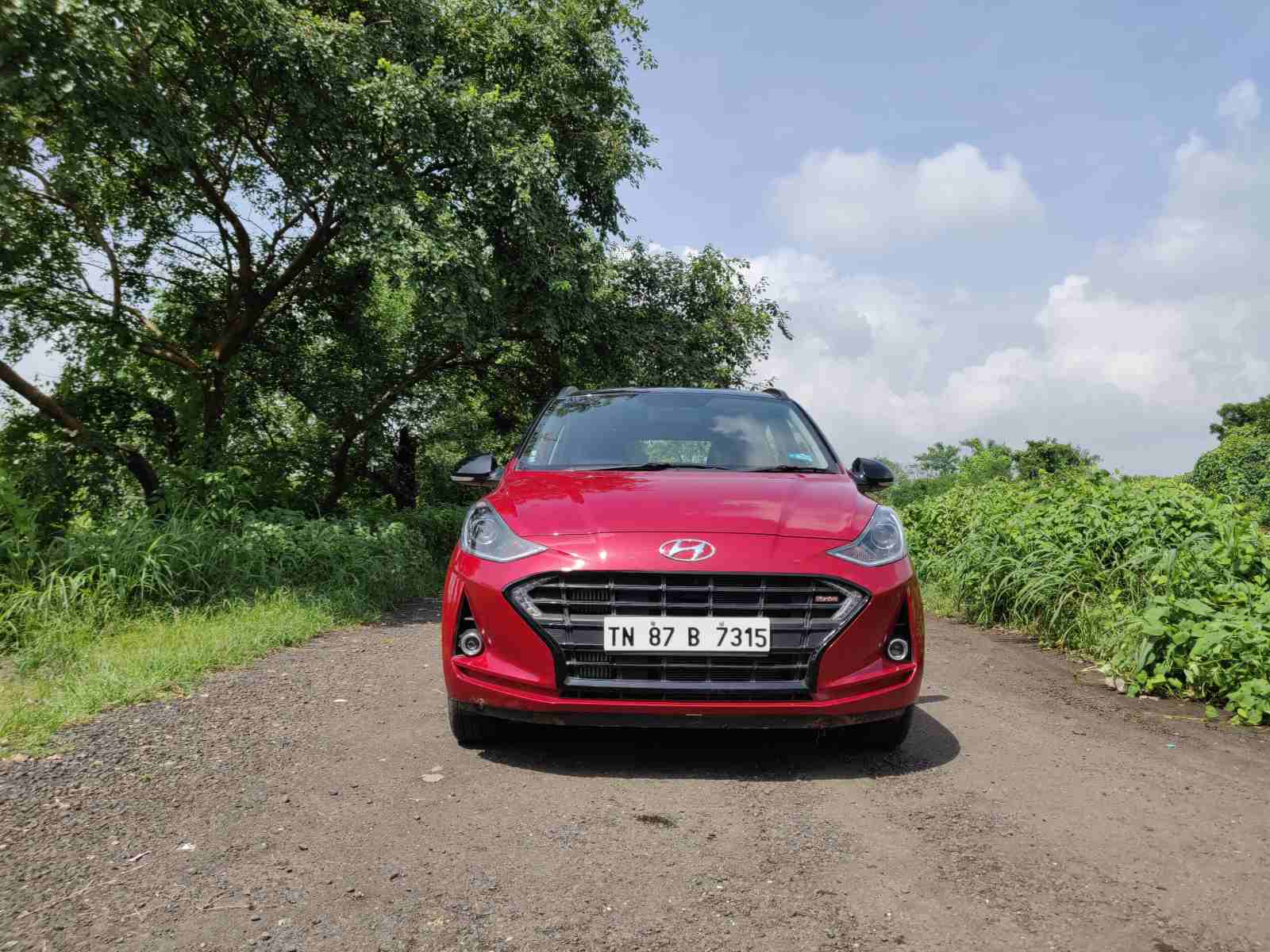 It has been quite some time since hot (or rather warm) hatchbacks made their way to our country. However, their popularity has gone up only in the past couple of years. Primarily developed to cater to the demands of an enthusiast, hot hatchbacks in India have been slightly tweaked versions of everyday two-box designs.

These days, small-capacity turbo-petrol units have become the go-to option for manufacturers to dish out one. The Grand i10 Nios Turbo is Hyundai’s attempt at taking a jab at the Volkswagen Polo TSI which is renowned for its driving dynamics and a peppy motor.

Hyundai has plonked in a 1.0-litre Turbo GDI unit in the Grand i10 Nios to bump up its performance. The turbo-petrol unit churns out 100 PS @ 6000 rpm and 171 NM of torque. The numbers are impressive enough to classify the Grand i10 Nios as a hot hatch in our scheme of things.

The 3 cylinder turbo-petrol unit is a sprightly performer and it catapults the Grand i10 Nios to 100 km/h from nought in a little less than 11 seconds. Pretty impressive for a car of such small proportions and considering its pricing, that is some decent amount of power. What impressed us even more is its tall gearing. This little thing can cross the 100 km/h mark in second gear and the 3rd gear will see you crossing the 160 km/h mark. Get on an open stretch, give it some beans and it can clock impressive speeds. It does take some time to get in its element though. The low-end performance isn’t as impressive and it is only after you cross the 1500 rpm mark when you start feeling some pull. 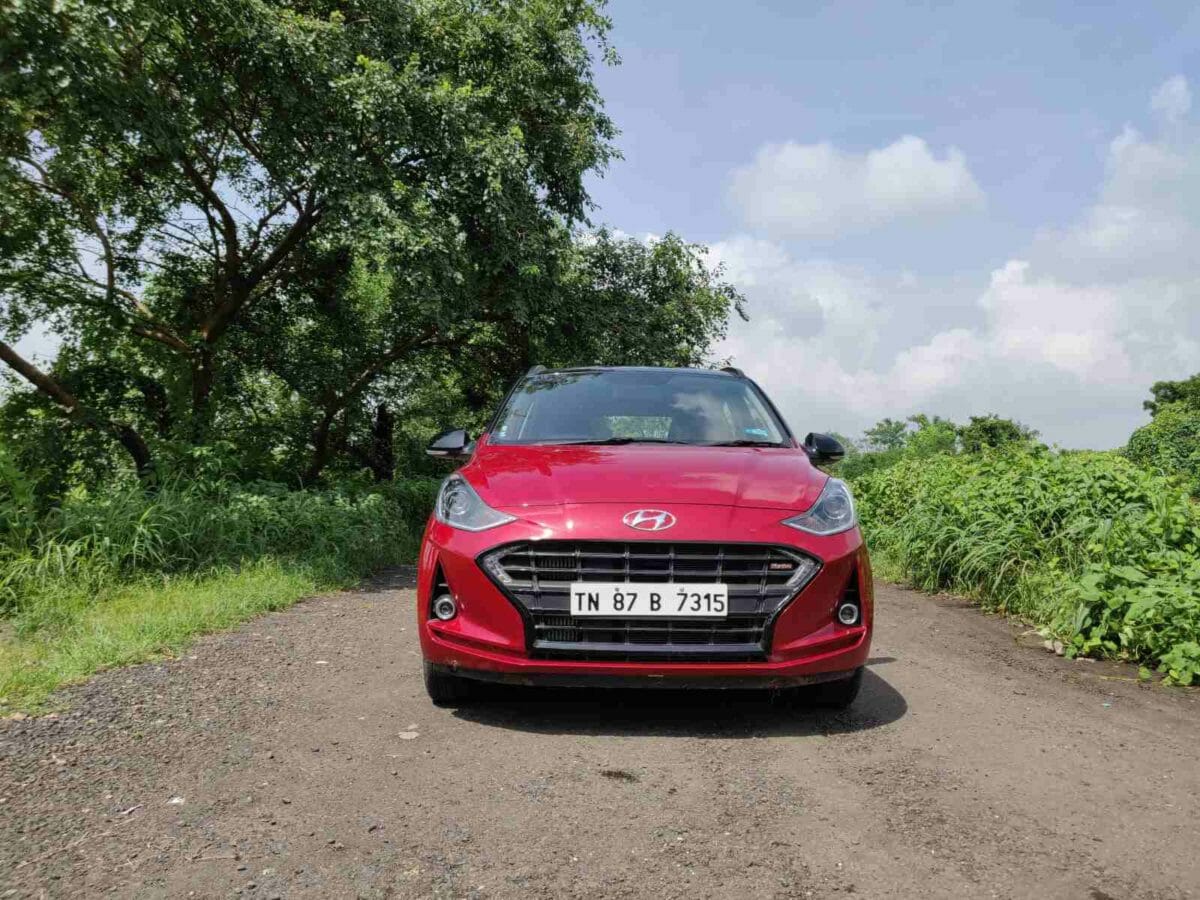 But when you cross 2300 rpm, the turbo gets spooled up properly (starts spooling near the 1600 rpm mark) and kicks in to make you experience a pronounced shove. This enthusiastic motor redlines at 6600 rpm. While this engine might not be as tractable as Hyundai’s other naturally aspirated motors, there’s plenty of torque in the ideal operating range to mask that downside. The engine is very refined and stays the same throughout the rev range. The exhaust note isn’t exactly what you would call ‘sporty’ but it lets out the familiar 3-cylinder thrum once you cross the 3000 rpm mark. 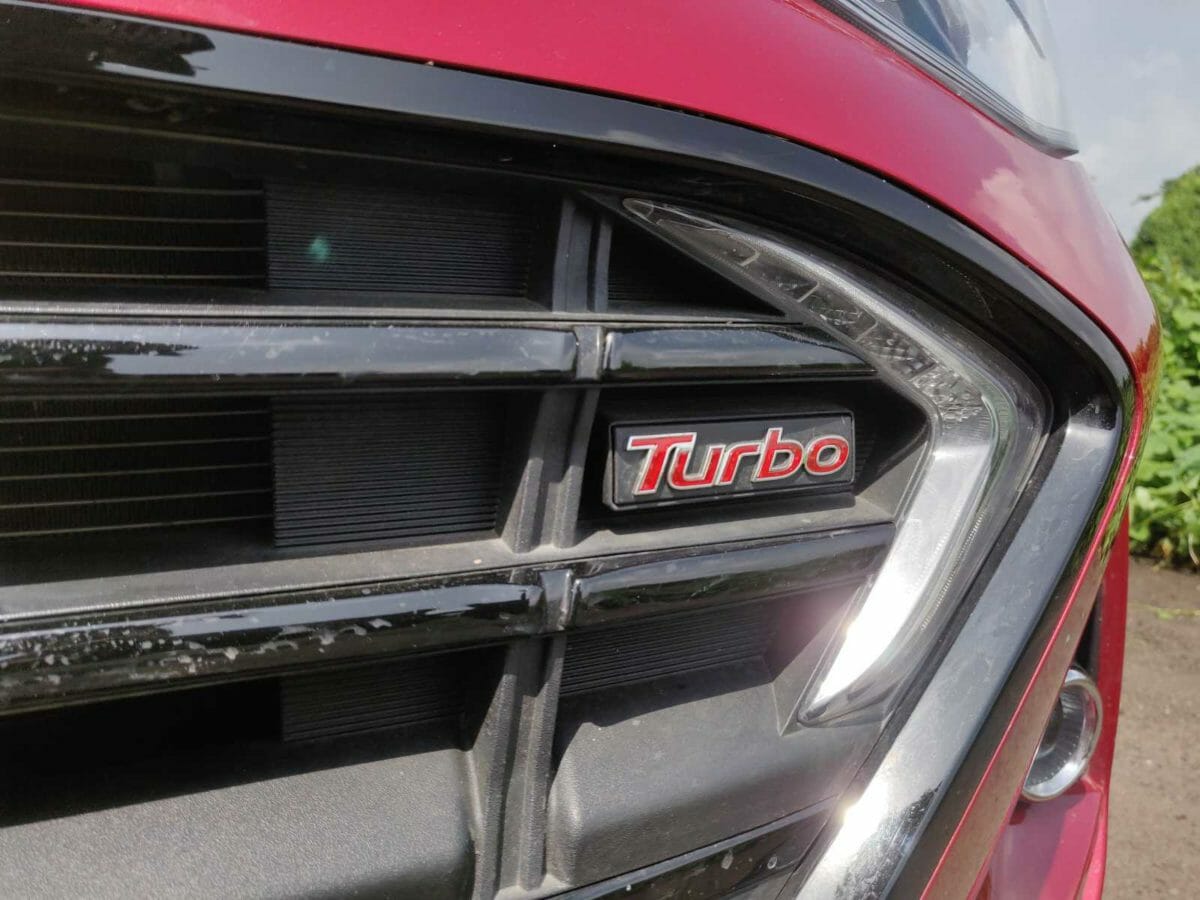 Another thing where the Grand i10 Nios shines is its exceptional fuel economy. This was one of the prime reasons why Hot Hatchbacks didn’t primarily do well in our country because they would put an alcoholic to shame, when it comes to filling the belly with fuel. But this 3-cylinder turbo-petrol unit has an ARAI certified fuel efficiency of 20.3 KMPL. During city runs, it can easily deliver somewhere between 12 – 14 kmpl. Show it some open stretches and the fuel economy will get bumped up to 18-19 kmpl as long as your right foot behaves.

While its peppy motor appeals to the enthusiast in us, its driving dynamics reek of practicality. It might work in some people’s favour who want a hatchback for their daily driving needs with a sprinkle of some sprightly performance. But if you are a purist and an out and out enthusiast whose only priority is experiencing driving pleasure, the Grand i10 Nios leaves some boxes unchecked. It is not naturally sporty and communicative as the Volkswagen Polo. 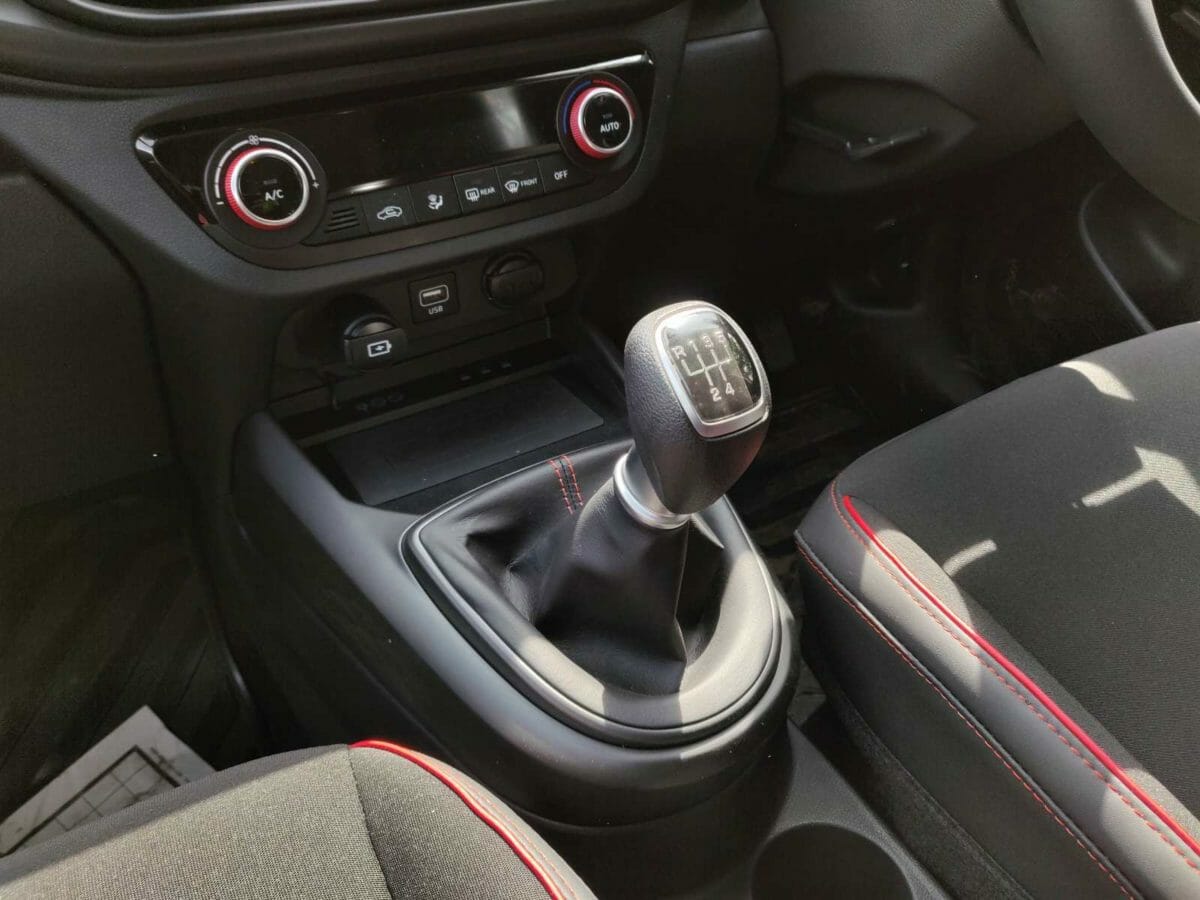 The steering system is devoid of any feedback and the chassis-suspension setup isn’t as communicative as one would like. If only Hyundai had decided to go all-in and made this put the power down in the same manner it makes it. The suspension setup is neither too stiff nor plush. 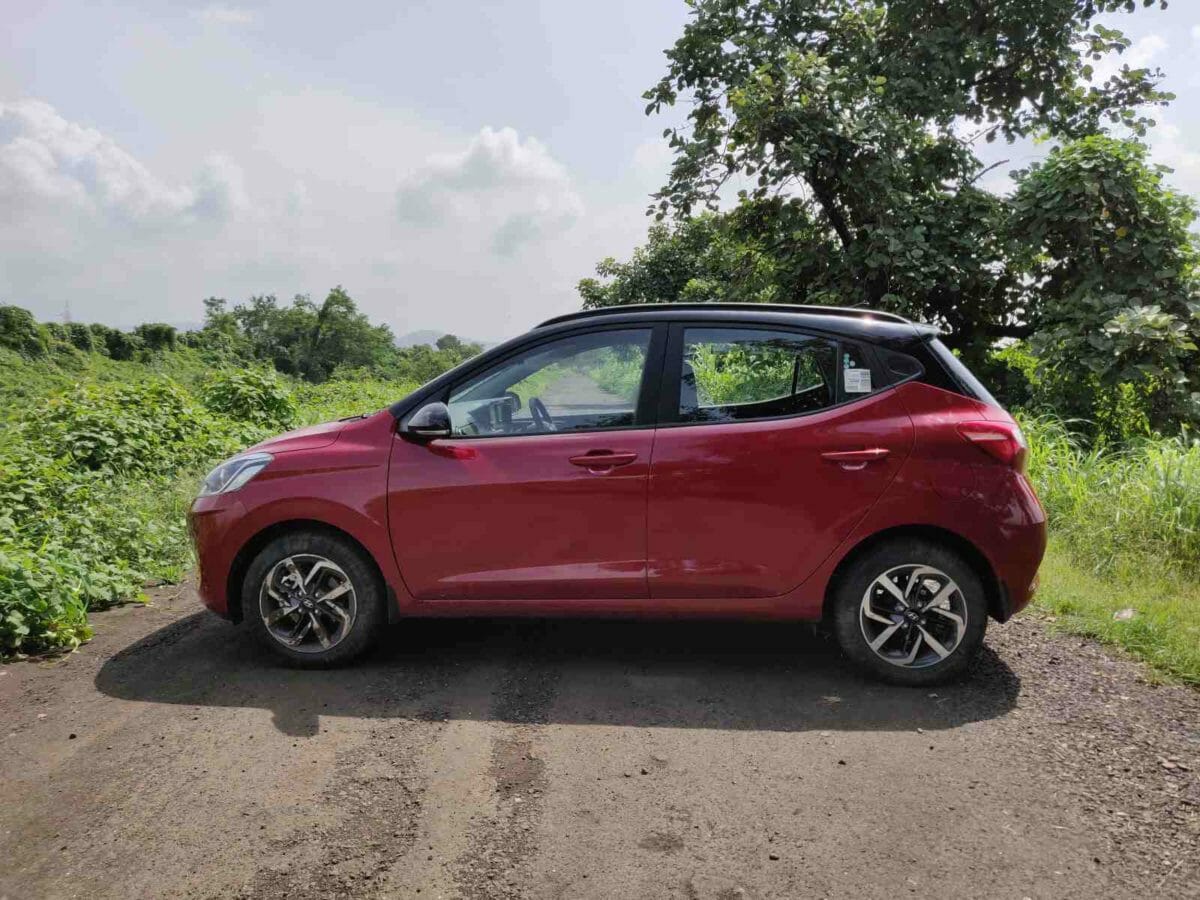 It is compliant and leaves no scope of complaint even on uneven surfaces. It might not be as involving as the Volkswagen Polo but it remains stable and sure-footed. Its intentions are pretty clear. It doesn’t want to be just a performance-oriented car. It is basically a daily driver which will put a smile on your face with its peppy performance.

The Grand i10 Nios turbo is an attractive hatchback and is only available in the Sportz trim. It is offered in strikingly contrasting dual-tone colours – Fiery Red with Black Roof and Polar White with Black Roof along with single tone colour options – Aqua Teal & Polar White. The dual-tone shades manage to stand out because they lend that much-needed visual sportiness. The front end is highlighted by projector headlamps and fog lamps. A small turbo badging sits proudly in the all-black grille. The visual treat continues to the side profile as well, where the 15-inch wheels with diamond-cut alloys take the centre stage. 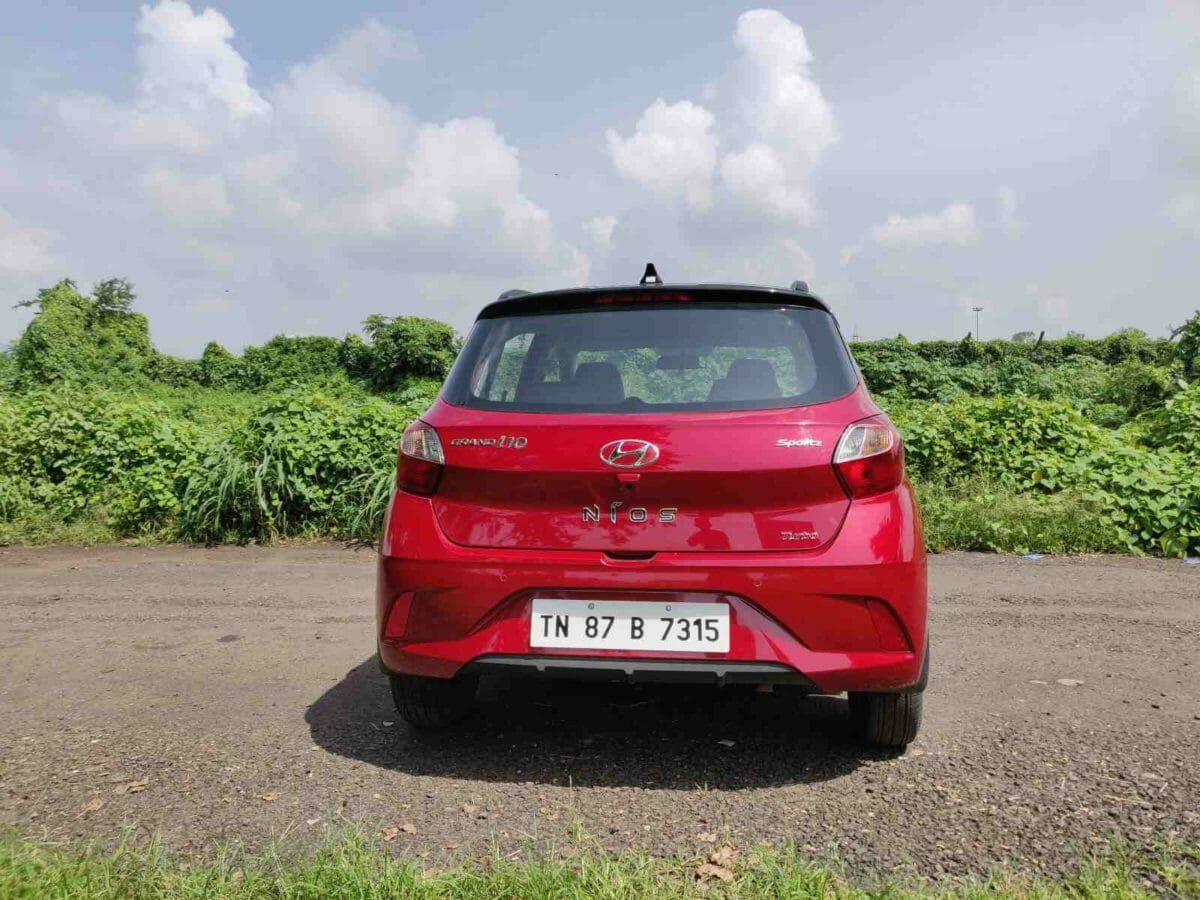 There’s a faux diffuser at the rear with a small spoiler and a turbo badging to culminate things in a nice and attractive manner. It does miss out on a rear wiper though which is more than just a provision but falls more in the line of being a safety omission. The sportz variant also doesn’t get a boot light. 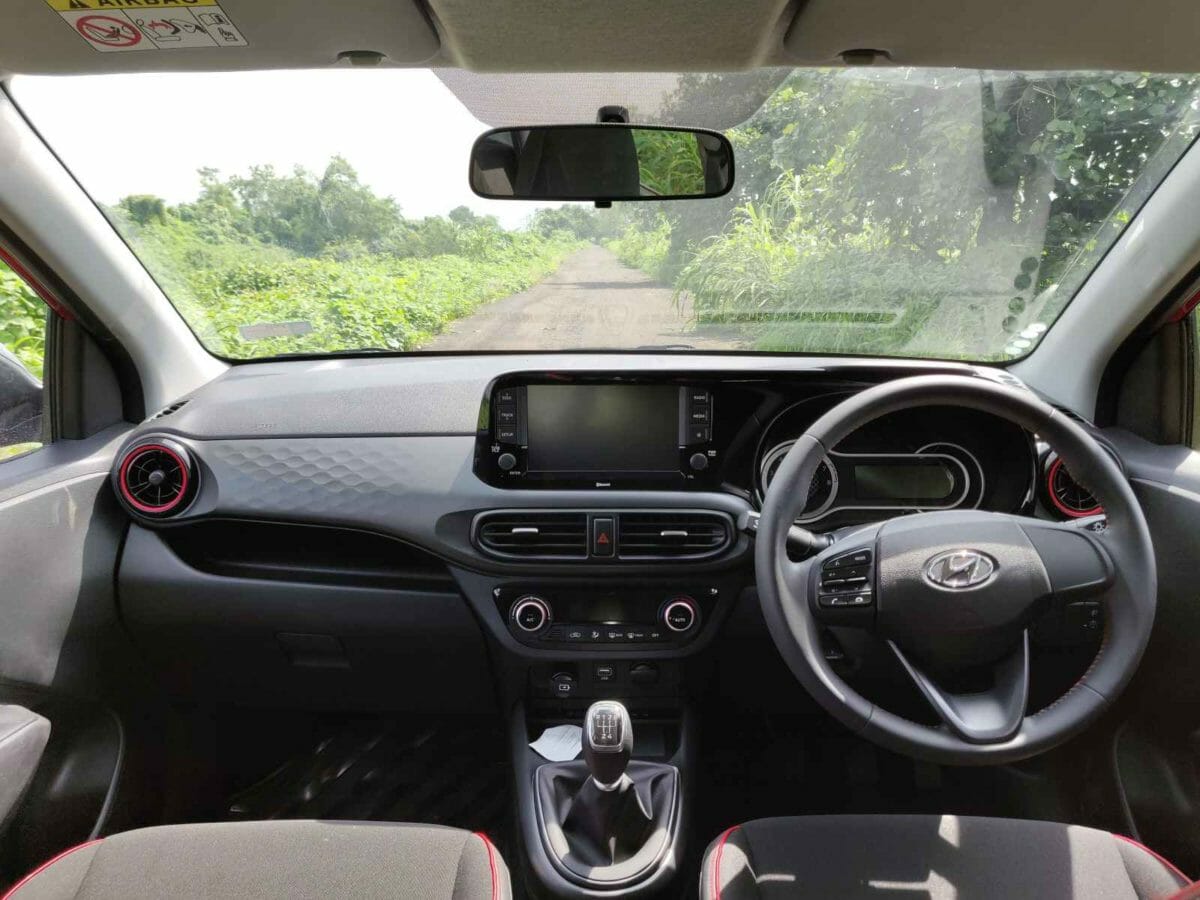 The cabin is slightly redesigned for the Turbo variant to add that hint of sportiness. The all-black cabin with red inserts here and there definitely make the cabin look sportier than its counterparts. There’s an 8-inch infotainment screen which takes the center stage. The instrument console is made up of an analogue tacho with a digital speedometer. Other creature comforts include wireless charging, automatic AC, steering mounted controls, Arkemyss sound system and rear ac vents with a power outlet.

Also read: The Hyundai i10 N Line Is A NIOS In Sharp Clothing

The Polo might be better at delivering a better driving experience, thanks to its driving dynamics which go hand-in-hand with the engine’s delivery. But it loses out on the equipment front and its maintenance will cost you more as compared to the Grand i10 Nios Turbo.

If you are looking for a absolute driver’s car between the two, the Polo comes out on top. However, if you need a daily driver which handles the bumps well, gets you all the latest equipment for your money, and sprinkles some peppy performance on top of all that, the Grand i10 Nios Turbo ticks all the right boxes.