Home Honda Honda teases 2012 CR-V on its US site 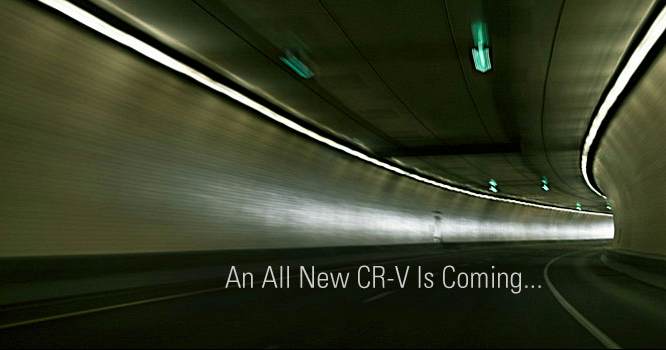 A few weeks back we brought to you the first images ever of the brand new, 2012 Honda CR-V. Now the Japanese carmaker has officially declared that the launch of the next generation CR-V is indeed very close. The new model, as we saw in the spy pictures, will be bigger than the current model, and will boast of more features, and possible a third row of seats.

In its latest iteration, the CR-V will be powered by the same 2.4 liter i-VTEC powerplant that current propels it, although the power will be improved slightly and the emissions will be less. For the UK market, there will also be a diesel option in the form of the 2.2 liter i-DTEC engine producing 165 horses. The current CR-V too is available with the engine in some European countries. It’s a shame though that Honda has not considered the oil burner for India, and shot itself in the foot. Had there been a diesel option for the CR-V thousands of SUV buyers who strayed onto the Captivas and the Santa Fes of the world wouldn’t have looked beyond the H badge.

The pictures used by Honda as a teaser doesn’t have the picture of the new model on it. It just shows a tunnel, which may just be a screen grab from one of the upcoming TV spots for the car. Honda will reveal more details about the 2012 CR-V.

“With a new design—both inside and out, new features and new possibilities, the 2012 CR-V will set a new standard for the class. As a top-selling crossover for over five years, expectations for the 2012 CR-V are high and we’re confident they will not only be met, but exceeded. Much more will be revealed over the next several months so be sure to sign up on this page to receive updates,” says Honda.

Here’s a spy picture of the new CR-V we showed you a few weeks back. Click on this link to read our earlier story on the car.