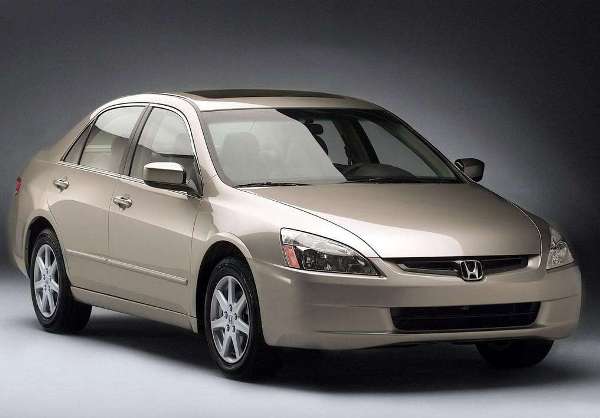 Honda is recalling its year 2003 Accords in USA. According to the National Highway Traffic Safety Administration of America, the car has a fault with its ignition interlock system. The ignition key of the car can be removed even when the transmission lever is not in ‘Park’ mode (in automatic variants). This is potentially hazardous, as the car may just roll away on a slope and crash. Apart from the 2003 Accords, some year 2003-2004 Civics Elements built in 2003 and 2004 are also a part of the recall.
Honda states that the ignition interlock system can wear prematurely, which allows the key to slide out irrespective of the transmission lever position.  Honda said the ignition interlock mechanism could be damaged or worn during use and “it may become possible to remove the ignition key when the shift lever is not in park.”  The company said it has received several complaints about the ignition interlock and “is aware of a small number of related incidents, including one that resulted in a minor injury.”
Do the Indian Accords also face a similar problem? We are not sure, as there aren’t many auto variants from that year, but if you are a 2003 Accord owner, we suggest you ask your carmaker about the details.
Here’s what the NHTSA site has to say about this recall.
Summary:
HONDA IS RECALLING CERTAIN MODEL YEAR 2003 HONDA ACCORD, CIVIC TWO AND FOUR DOOR, AND MODEL YEAR 2003-2004 HONDA ELEMENT VEHICLES. THE INTERLOCK LEVER OF THE IGNITION SWITCH MAY UNEXPECTEDLY DEFORM, WHICH CAN ALLOW THE INTERLOCK FUNCTION OF A VEHICLE WITH AN AUTOMATIC TRANSMISSION TO BE DEFEATED.

Consequence:
REMOVAL OF THE IGNITION KEY WHEN THE GEAR SELECTOR OF A VEHICLE WITH AN AUTOMATIC TRANSMISSION HAS NOT BEEN SHIFTED TO THE PARK POSITION CAN ALLOW THE VEHICLE TO ROLL AWAY, INCREASING THE RISK OF A CRASH.
Remedy:
DEALERS WILL REMOVE THE ORIGINAL INTERLOCK PIN AND LEVER WITHIN THE IGNITION SWITCH, AND REPLACE THEM WITH NEW, DESIGNED COMPONENTS. THIS SERVICE WILL BE PERFORMED FREE OF CHARGE. THE SAFETY RECALL IS EXPECTED TO BEGIN ON OR ABOUT SEPTEMBER 29, 2010. OWNERS MAY CONTACT HONDA AT 1-800-999-1009.
Notes:
HONDA SAFETY RECALL NO. R44. OWNERS MAY ALSO CONTACT THE NATIONAL HIGHWAY TRAFFIC SAFETY ADMINISTRATION’S VEHICLE SAFETY HOTLINE AT 1-888-327-4236 (TTY 1-800-424-9153), OR GO TO HTTP://WWW.SAFERCAR.GOV