Honda Motorcycle and Scooter India announced the national winner of #HondaNAVicustomania. The Grand Finale was concluded at Bollywood Music Project 2018 where thousands of youth congregated to witness Bollywood music performances and saw the FUNtastic NAVi in it’s full glory. At the grand Finale the winners were felicitated by Minoru Kato, President and CEO, Honda Motorcycle and Scooter India.

Launched in 2016, NAVi’s design statement in its standard form, is FUN TO SEE and pure FUN TO RIDE. Providing endless possibilities in expression & Customization for the young customers – NAVi is designed in such a way, that it opens up a significant opportunity to modify & customize it to suit one’s taste. And therefore pure FUN to Create. 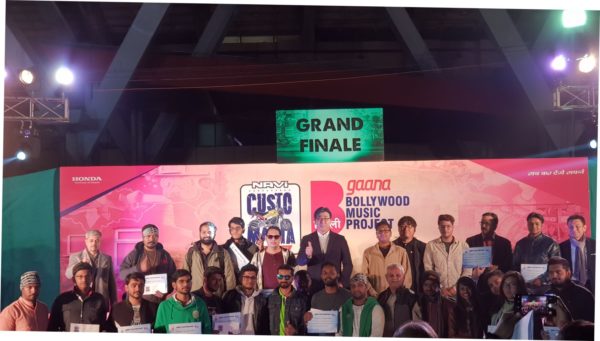 Battling it out amongst the Top 24 (2 winners from each city), Grand Finale winner Dhananjay Parihar received a prize money of INR 2 lakh along with a once in a lifetime opportunity to showcase his custom NAVi’ inside the Honda 2Wheelers India pavilion at Auto Expo 2018. Ashiq Joseph Thomas from Kottayam finished runner-up and won INR 1 lakh.

Not just for NAVi owners, Honda also organised a separate web and application edition of the contest, especially for the tech savvy young generation. Jyugaandh Veer Singh and Lalith Ankala were announced the winners of the web and application-based editions respectively which alone saw more than 5500 participations.