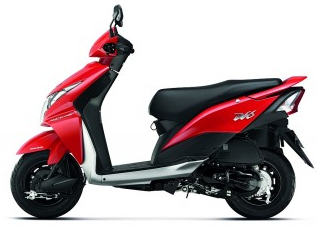 There used to be a time when Bajaj used to be the leader in the scooter segment. Then, the Indian manufacturer shifted its focus to motorcycles and the Chetak geared scooter went out of production. Meanwhile, Japanese two-wheeler maker, Honda had launched its Indian division Honda Motorcycles & Scooters India (HSCI) and had become a leader of the scooter segment within next to no time. The Honda Activa is in its second generation and still commands a huge waiting period. While the Honda Activa, with its not overtly stylish looks, appealed to a large section of the society, it was the sister scooter with the same 102cc petrol engine that charmed the youngsters with its ‘moto scooter’ looks.

Now it has been reported that Honda has introduced a new Dio scooter with a 110cc 8 BHP (borrowed from 2nd generation Activa) motor that claims 15 per cent higher fuel efficiency than before (55 kmpl). The scooter will be sport a price tag of Rs 42,362, and will be available from end-February.