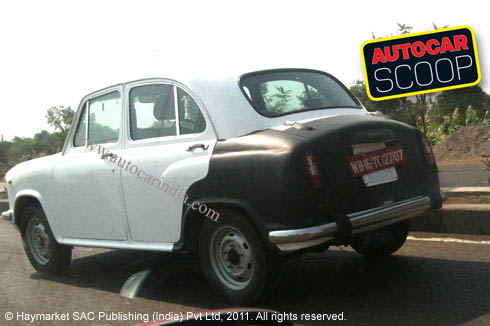 The cutting boot short bug has bitten everyone. Blame it on our flawed excise duty system, car makers are looking forward to sacrifice the boot space of the car to make it a compact sedan which makes it fit in the sub 4-meter category which attracts less duty. The newest company to do this is might surprise you as it’s the Hindustan Motors and our country’s most beloved old heritage car – ‘The Ambassador’.

The chopped rear still sports the old look but might seem odd as we are used to see the Amby in its full standard size. There are no major treatments in the car, the current 1.5 diesel mill which produces power figures of 35.5bhp and 13.7kgm of torque maybe worked on and made powerful with the help of a turbo-charger.  Expect this car later this year or the Indian Auto Expo 2012.

Like the New Swift Dzire, the buyer can save upto Rs. 30,000 thanks to new shorter boot. Will this cost cutting make the Amby any more desirable is a quesrtion that’ll be answered only after the launch.  Also there were talks about the HM going to revive their 80’s Amby variant which was a pick up truck sold as – Hindustan Porter. If that really happens HM has got two cards that they can play this Auto Show at Delhi. Tell us what do you think