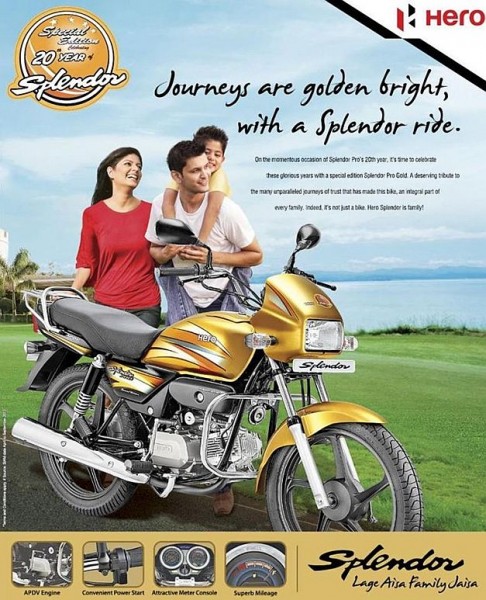 Trust us when we say that we saw it coming! It has hardly been a few days since Honda Motorcycles and Scooters India, the Indian subsidiary of the Japanese automaker giant, launched the new Honda Dream Neo commuter bike and Hero MotoCorp, the king pin of Indian Two Wheeler industry, seems to have retaliated by coming up with yet another special variant of the dated but very successful Hero Splendor.

The latest special edition of the Splendor has been named as the Hero Splendor Pro Gold Special Edition.

It may be noted that HMSI has been pretty vocal about the fact that it aims to displace Hero MotoCorp from the top of sales chart and the recently launched Honda Dream Neo might turn out to be the principal fragment of HMSI’s plan.

While we feel that the latest special variant of the Splendor has been launched in a move to keep the potential customers from turning towards the Honda Dream Neo, Hero MotoCorp is advertising the new bike as a commemorative model that has been launched to “celebrate the motorcycle’s 20 year old existence”.

The Hero Splendor Pro Gold gets . . hold your breath. .  a golden shade of paint! Other than this, the only change that we were able to find is the addition of special edition badges.

The Splendor Pro Gold is powered by the very popular 97.2 cc four stroke single cylinder engine that can probably survive a nuclear blast. The motor has a max power output of 7.8 PS @ 7500 rpm and a peak torque rating of 8.04 Nm @ 4,500 rpm.

The Hero Splendor Pro Gold special edition variant goes on sale for a price of IRN 48,500 (ex-showroom, Delhi). The bike comes with alloy wheels and a self start.

It would be pretty interesting to see if a ‘special edition’ would be enough to tackle the recently launched Honda Dream Neo entry level commuter bike.