Home News Head Constable Slaps A Person For Asking Him Not To Use Phone While Riding; Gets Suspended

Head Constable Surinder Singh was recently suspended after he slapped Sumit Kumar, a resident of Kansal, Punjab for asking him not to use a phone while riding. The video went viral on social networks and was brought to Chandigarh Police’s notice through Twitter which resulted in the suspension of Singh . The incident took place in Sector 36/37 of Chandigarh. Here’s the viral video that got Head Constable Surinder Singh suspended (Courtesy AmArpal Singh Prince) :

What happened? Sumit Kumar spotted the on-duty constable, riding his motorcycle while talking on the phone. Kumar decided to record the incident on his smartphone before confronting the cop. Instead of answering to Kumar’s question, Singh slapped him for recording the video. Kumar was forced to speed away to save himself from further abuse. Not only was Singh suspended, he was also charged for using mobile phone while riding a motorcycle. Moreover, Singh’s driving license has been suspended for three months. Below is the copy of the challan that was posted in the comments section of the post: 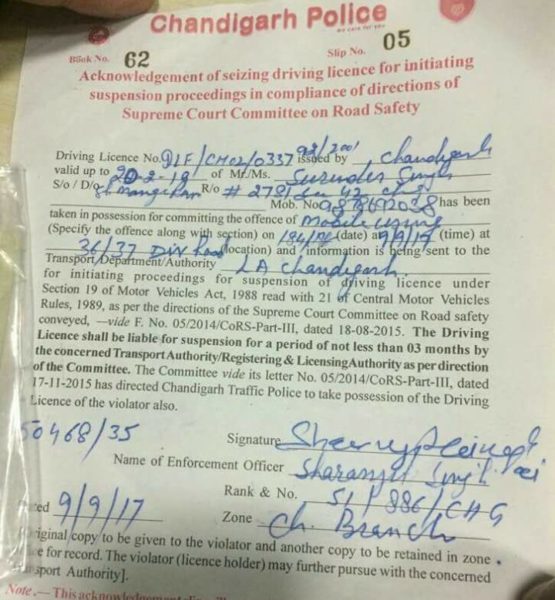 What do you have to say about the incident? Let us know your views through the comments section below.