Home News Have you seen the Nissan Micra facelift TVC? 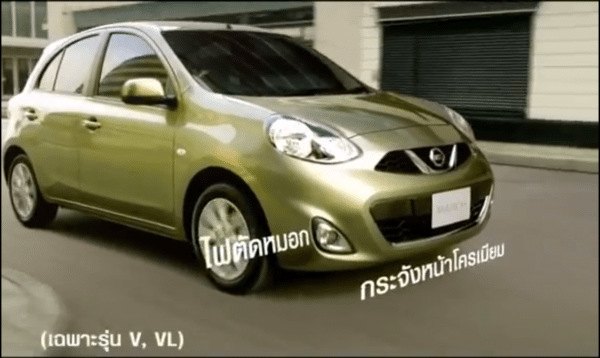 Nissan has now published the same promotional video and we can hence have an even better look at the updated car.

It may be noted that the current generation of Nissan Micra was launched in 2010 and a mid life facelift was due since some time now. The minor cosmetic update should enable the Micra to soldier on for at least two years more.

The Nissan Micra facelift comes with a thoroughly updated front fascia that sports new headlamps, a new grill, new fog lamps and a revised bumper. It seems that the new front fascia has been inspired from that of the Nissan Extrem concept that we first saw at the 2012 Sao Paulo Motor Show.

We feel that the large air dam together with the wider grille bestows the Micra with a hint of sportiness and masculinity. The Micra no longer has the ‘dolly car’ appearance of the pre-facelift model. However, the front end styling of the new car might not have a universal appeal.

The Micra remains unchanged when viewed side on. However, the car is sure to get new design alloy wheels for all the markets it will be sold in. Back at the rear end, the major differences that we can spot are the new bumper and a new tail lamp motif that gets the LED treatment. The interiors of the new Micra remain get an upholstery change and a Bluetooth enabled in-car entertainment system.

The updated Micra is sure to come to India. Safely expect the India spec car to continue with the current set of engines that includes the tried and tested 1.5 litre K9K diesel motor and the 1.2 litre petrol engine. Both the engines are mated to a 5-speed manual transmission as standard. The petrol variant will also come with a CVT Automatic gearbox.