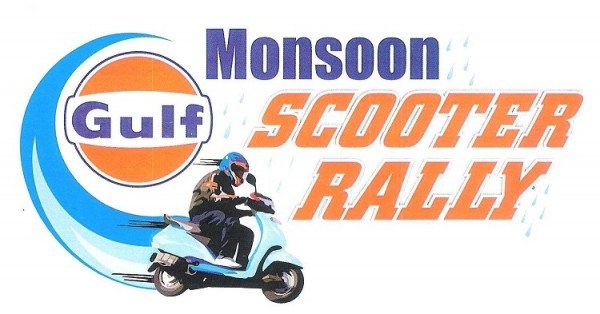 Fourty one riders,including defending champion Rustom Patel and former champions Manjeet Singh Bassan, Avtar Singh and Shamim Khan, have confirmed participation for the 24th Gulf Monsoon Scooter Rally, to be run around the backwoods of Navi Mumbai on Sunday, July 7.

With the monsoon having set in, this Gulf Oil Corporation event, organized by Sportscraft, promises a stiff challenge for both rider and scooter.
Despite having done a recce over the weekend, even the best in the business are sure to find the course chalked out by Sportscraft tough to negotiate.
This rally will see many firsts, like thirteen novice riders, a lady participant, Loretta Mathew D’lomen, and a team entry from TVS Racing. The Bangalore two-wheeler manufacturer will be represented by two of its best dirt racing riders, Pramod Joshua and R Nataraj.

Other team participating is 9T9 Racing team which will be represented by Pinkesh Thakker. Shamim Khan riding a Mahindra Rodeo is supported by Mahindra & Mahindra

With the Wednesday being the closing date for entries, Sportscraft have indicated that just four more will be accepted.
After the rally starts from Our Lady’s Home in Parel at 8 am, the riders will proceed along Vikhroli to Navi Mumbai for a 25-km competitive sector. Here lies the main challenge, as some tracts are gravel-laden, slushy and water-logged. The first timers, in particular, will have to be extremely cautious while negotiating the many bends and inclines.

And Bhopal’s Muzzafar Ali should not be written off. Last year he placed second, and having gone already through the grind of the event he will surely be looking to improve on his showing.

All eyes will be on Pramod Joshua and R Nataraj of TVS Racing team as they being the former Dirt Track National Champions.
In all, come Sunday, a keen contest is expected as man and machine take on the grueling challenge Sportscraft has plotted.