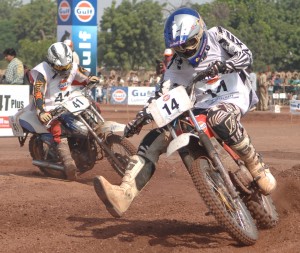 Some of the country’s most popular two-wheeler riders gathered in Jodhpur on Sunday, October 7, for the third leg of the Gulf Cup Dirt Track racing series. And, as expected, the competition was intense, each giving his best in the round of the FMSCI National Championship, promoted by Gulf Oil Corporation Ltd, India leading lubricant manufacturing company, and organized by Mumbai’s Sportscraft. In the end, two riders shared the honours at the Polo Ground, in Panchbatti circle, Ratnada.

Pramod Joshua and Harith Noah stole the limelight, winning a race each in the glamour event — Foreign Motorcycles class for 250cc 2 and 4-stroke. While Joshua extracted the maximum from his well-prepared bike to win the first race in the category, Noah had revenge over his TVS Racing teammate from Bangalore, winning the second race after a battle royal, which saw Joshua place only fourth.

TVS Racing riders from Bangalore swept the top three places in both races. All were astride a TVS 250 FX. While Joshua won the first, finishing ahead of Noah and R Natraj, it was a different story in the second as Noah took the top spot, ahead of Natraj and Anan Ahmed.

Joshua and Natraj (both astride TVS Apache RTR) also won a race each in the Indian Expert class for motorcycles upto 260cc two & four stroke. While Natraj won the first race, finishing just ahead of his TVS Racing mates from Bangalore S Madhu and Harith Noah, Joshua came up with a class act in the second as he breezed his way to first place, ahead of Natraj and Noah , who were second and third respectively.

A record 174 entries were received for the event and each race witnessed fierce competition.

Dirt track racing is all about riding at top speed on a specially-laid out, winding track, which is slushy and gravel-laden at many places. The rider has to negotiate serpentine bends while doing several laps.

The seasoned riders, as expected, turned in a scintillating display, but it was heartening to watch the local talent and some first timers, like Nitish Sharma, who came up with a fine display in the Novice class. The Jaipur rider, astride a TVS Fiero, won a close race, for motorcycles upto 160cc 4-stroke. He was always under pressure as he went around the specially-laid out serpentine course, but, to his credit, he did well to overcome a strong challenge, finishing ahead of fellow-Jaipur riders Nitin Singh (TVS Fiero) and Raj Mathur (Yamaha), who placed second and third respectively.

Bangalore’s Naresh VS was the undisputed king in the Private Expert Class for modified foreign motorcycles upto 260cc. Riding a Yamaha RX 135, he faced a stiff challenge from second-placed Suhail Ahmed (Yamaha RX 135) and Bhopal’s Syed Asif Ali (TVS Apache)  but eventually came up trumps in both the races which finished in that order.

With top class riding and excitement galore, this popular Gulf Oil Corporation-sponsored event was applauded not only by the participants, but also spectators.

“The event was really enjoyable and thrilling. There was some great riding. It was good to see for the first time riders and their bikes racing on a track,” said a spectator.

He was also surprised how the event was run so smoothly. There were 14 races — 9 Championship & 5 Open class — and all started on time and ended without any glitch.

Lauding the conduct of the meet, Gulf Oil India Limited’s General Manager – Marketing  Bijoy Paul echoed the sentiments of the riders when he said Sportscraft did a magnificent job in handling an event of such magnitude. He promised to hold more two-wheeler events in Jodhpur.

“We saw some fine riding skills today and the local siders were really impressive. Am sure that will more events of the kind here we will soon see a champion emerge from this historic city of Jodhpur,” said Paul.

Sportscraft bossman Shrikant Karanai complemented the riders for their cooperation, saying the smooth conduct of the event was only possible because them. “If all went through well, it is only because of you riders. My thanks also go out to all those who contributed in staging this event, like the city police, local motorsports organization, media and, last but not the least Gulf Oil which  is doing everything to promote two-wheeler racing and give riders a chance to show off their talents.”