We all saw Top Gear’s Richard Hammond drive Mercedes-Benz’s G63 AMG 6X6 beast on the tarmac and on the sand dunes in Dubai. But not many can have that luxury as this SUV from Mercedes is priced horrendously and only 20-30 models were ever meant to be made for sale.

However, some of us might be able to get a taste of this machine, at least virtually as this vehicle is now indirectly featured in Grand Theft Auto V with the name “Dubsta.” 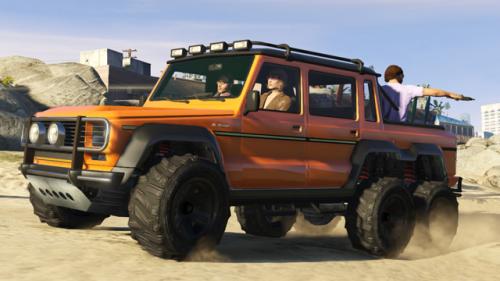 Rockstar Games has introduced a free “I’m not a hipster” update which includes an Mercedes-Benz G63 AMG 6×6 named as “Dubsta”. However, only updating will not let to drive this SUV as the 3-axel, 6-seater vehicle is unlocked only once you hit rank 100.

The real life G63 AMG 6X6 is powered by twin-turbocharged 5.5-litre V8 from AMG with 536bhp and 759Nm of massive torque. This power is transferred to all the six wheels through Mercedes’ 7G-tronic seven-speed automatic transmission. The G63 AMG 6X6 propells from a standstill to a ton in less than six seconds.

So what are you waiting for! Go online and start driving.