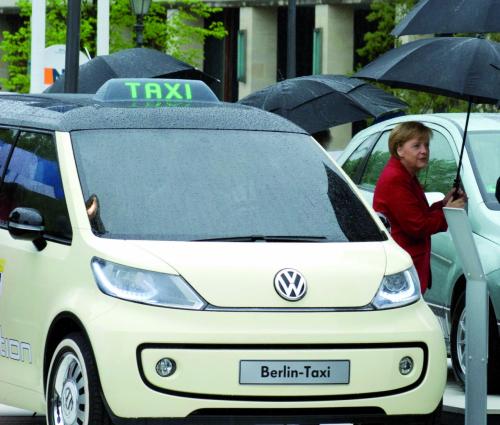 Fuel Crisis seems to have already been planning a suitable date to hit the earth and bring in front of us a major problem. The tension is already being felt with the ever rising fuel prices. However, alternatives are being developed too. Month after month, there are new innovations in the field of electricity driven automobiles. The well known car marquees from across the globe have already designed various Electric Concepts which will soon go into production in the coming years.

In the midst of all this, the German federal Government has pledged to have about 1 million Electric cars plying on German roads by the year 2020. The goal of reaching the 1 million mark by the next decade however wasn’t a new goal determined by Germany’s Chancellor, Angel Merkel. The goal was determined earlier in August, 2009 itself however, the chancellor in a meeting with Germany’s top auto marquees at Berlin emphasized on this goal. At the meeting, Volkswagen displayed its 2013 Golf Blue-E-Motion which is the VW Golf’s electric version. According to various sources, Merkel is pressurizing the Automotive and Energy industry to come out with new innovations and technologies that will make depending on Co2 emitting carbon based fuels a history.

It is high time that the Government bodies not only in India but across the globe join hands and bring out a collective solution for the problem of energy crisis.