From bringing in two very capable and well priced Pulsar models back at the start of this Millennium to recently showcasing the CS400 and the SS400 variants of the Pulsar, if there is any Indian manufacturer that has always made it a point to tickle the taste buds of us performance biking aficionados, it has to be Bajaj Auto Ltd. Other than launching a gazillion Pulsar variants, BAL has also been responsible for introducing the very tasty KTM 200 Duke and 390 Duke in India, thereby enabling Indian bikers to have access to world-class small capacity naked-street bikes. If this is not all, Bajaj Auto Ltd has also been the retailer of the Kawasaki Ninja 300 and the Kawasaki Ninja 650, two of the most successful Japanese bikes to be on sale in the country. Looking at all this, saying that Bajaj Auto Ltd has been answering prayers of many biking aficionados across the country on a regular basis won’t be an overstatement. 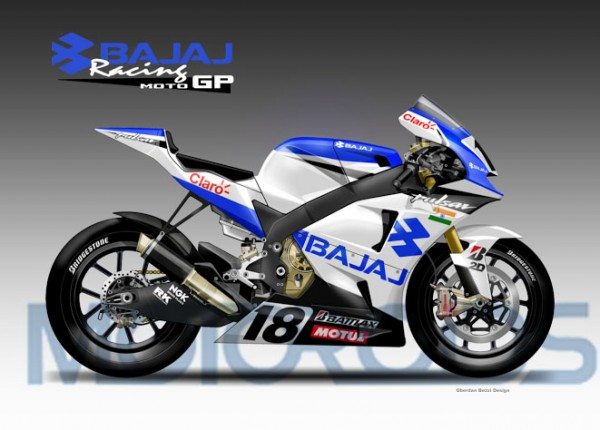 Hence, the thought of Bajaj Auto Ltd. someday entering MotoGP World Championship doesn’t come across as being too far fetched. While the bike maker might be at least some years away from entering International racing scene, we can quite safely hope that this plan is surely somewhere in the offing.

Here, on this page, is a speculative render of the Bajaj MotoGP contender, sent to us by our friend Oberdan Bezzi, who goes on to say- “If HERO (with EBR ) made its entry into the World Superbike Championship , at least as the main sponsor , BAJAJ should raise a shot and partecipate with  its own motorcycle in the MotoGP World Championship , the highest expression in the field of two-wheeled racing ! To do this, the leaders of BAJAJ would have hired many engineers from racing departements  Kawasaki and KTM  to study the bike can challenge the protagonists of the Championship. The engine should be a four-cylinder front pneumatic valve , while the chassis ,   will be a classic light alloy structure . All the best suppliers of racing components will be involved in this adventure.“

Have a good read of the little description he provides and suddenly, you would want this ‘flight of fantasy’ to soon become a reality.

Dream or next reality? What do you say folks?