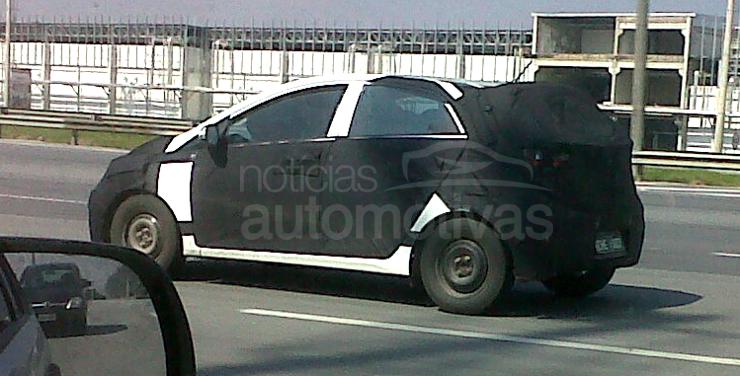 A few days back, we told you about the new small car Hyundai is planning to slot between the i10 and the i20. Aptly named i15, the new car will be for those who find the i10 too small and the i20 too expensive.  Noticias Automotivas of Brazil had brought to us the first pictures of the car. Now the same people have brought out even better and clearer pictures of the car.

Peter Zanetti, one of the readers of the Brazilian blog, managed to click the car in action. The new Hyundai car will be manufactured in Brazil, and has a very high probability of hitting the Indian shores as well.  The site reports that the car will be equipped with a choice of 1.0-liter and a 1.6-liter engines, although the choice doesn’t quite sound appropriate for the Indian market.

No clarity has emerged on the power trains, but we can expect Hyundai to choose from its current lineup of 1.2 / 1.4 petrol and 1.4 diesel engines, if at all it launches the car in India.Since the i15 will be positioned below the bigger and more expensive i20, the chances of it having any bigger engines is unlikely, so the 1.6 liter option gets ruled out.

The heavily camouflaged car doesn’t give away much, except its wide stance and a visibly roomy back bench. The Brazilian site reports that it will resemble the new Fluidic Verna from the front.

Still early days to comment on price, but if Hyundai wants to position it between the i10 and the i20, then the price should be somewhere there too, between the two. Going by the current roll-outs from the Hyundai stables we are sure the new car too would amaze one and all.

Do you think there is need for a car between the i10 and the i20? What should be the qualities / power of such a car if it comes from the Hyundai stables? What should be its pricing? Do let us know.