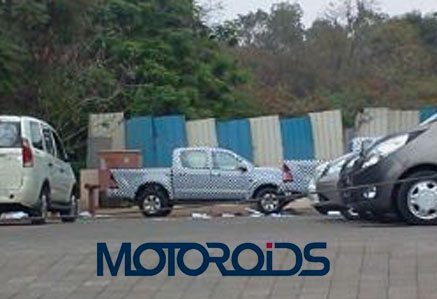 Our eagle eyed friend and an avid car enthusiast Rohan Patil has spotted a couple of Foton Tunder/Forland L. pick up trucks in Pune. We have to give it to Rohan for spotting the trucks parked in the confinement of Foton’s corporate office in Kalyani Nagar.

The Foton Thunder is a Tata Xenon sized pick up truck that is close to being launched in India. The Thunder will be manufactured in Pune and is expected to be powered by a 2.8 liter turbo diesel engine sourced from Cummins. This engine has a max power output of 160Bhp and peak torque of 380Nm. The pick up truck is also powered by a 2.4 litre, 4 cylinder petrol engine in some markets but there are no chances of this engine variant coming to us.

The engine is mated to a5 speed manual transmission with optional 4X4. The Thunder sports independent suspension at front and leaf spring at rear.

In the Indian market, the Thunder will battle it out against everything ranging from the Mahindra Maxx to the Tata Xenon and the Mahindra Scorpio Getaway. The high end variants of the Foton Thunder will come equipped with features like ABS, EBD, Airbags, Alloy Wheels, Tyre Pressure Monitoring, Parking Sensors, Steering Mounted Audio Controls, Automatic Climate Control, DVD Player, Electric Wing Mirrors and Parking Sensors.

Foton is a Chinese automaker that is a part of the Beijing Automotive Industry Company(BAIC). Foton produces a range of utility vehicles in its home market and is close to launching its Indian operations. The Thunder Pick Up Truck will be the first Foton product to be launched in India.